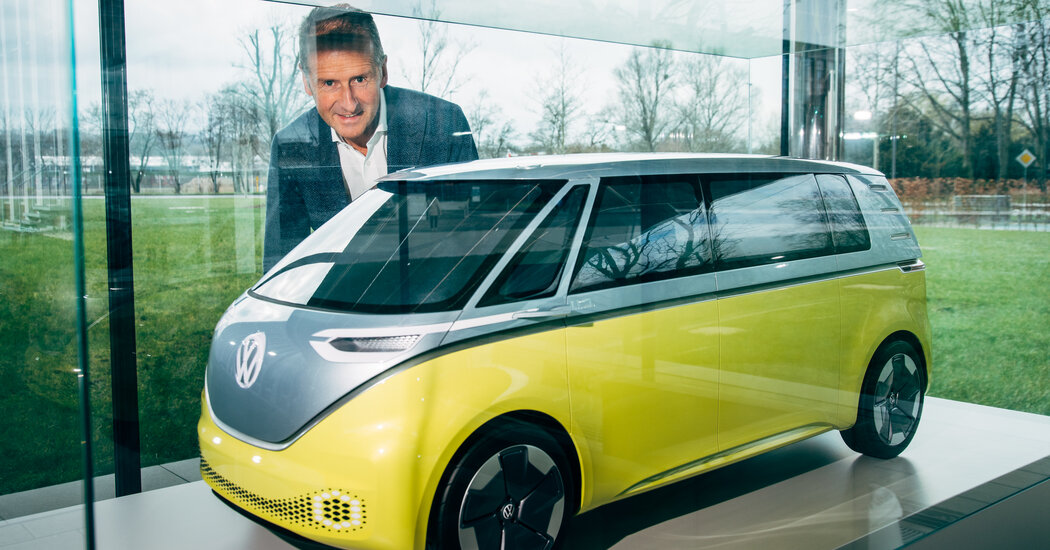 BERLIN — Volkswagen’s chief executive, Herbert Diess, won fresh backing from the automaker’s supervisory board on Thursday, but his responsibilities will be pared as the company seeks to win back investor confidence lost in recent weeks during a dispute about his leadership style.

As part of a compromise deal reached with Mr. Diess, 63, more authority will be handed to Ralf Brandstätter, 53, who last year took over as head of the Volkswagen brand. Mr. Brandstätter will join the board and begin managing the company’s business in China next summer. China is Volkswagen’s most important market outside of Europe, but the company has struggled to gain a toehold in the market for electric vehicles there.

Mr. Diess, however, will take on a new role as head of the company’s software unit, Cariad, which the carmaker views as essential to its future success and a key element of the process of transforming Volkswagen from a legacy carmaker to a competitor in the global market for increasingly computerized vehicles. The board also approved investments of 52 billion euros, about $59 billion, over the next five years to expand overall electric mobility.

“We have made important decisions and found good answers to make Volkswagen fit for the future,” the board chairman, Hans Dieter Pötsch, told reporters afterward. He also apologized to shareholders for the uncertainty caused by the latest round of speculation about leadership at the company. VW’s stock price has fallen as much as 20 percent over last six months.

Mr. Diess said the review of executive responsibilities “was an intensive process, and I am grateful that Mr. Pötsche did not lose his patience.”

“But I think it was a good process,” he added, “and at no time did I lose my motivation. The company is very important to me.”

When he was hired from BMW three years ago, Mr. Diess (pronounced DEES) was handed a two-pronged challenge: regain the trust of customers who turned their backs on VW after the diesel cheating scandal, and turning the company into a powerhouse of electric mobility.

His recent efforts to shake up Volkswagen have included stressing the gap in efficiency between Volkswagen and Tesla, the electric car company that is increasingly seen as VW’s main rival. He has pointed out that Tesla, which is building its first major European plant outside Berlin, is aiming to assemble each car in just 10 hours at its new plant, while some VW factories take nearly twice as long.

The focus on the Tesla has grated on many Volkswagen’s employees, already frustrated over their inability to produce as many vehicles as they could because of the parts shortages.

A crippling global shortage of semiconductors has slowed VW’s production lines, causing a 24 percent drop in third-quarter deliveries and a sharp fall in profit. Many workers have been stranded in temporary furloughs that were introduced to prevent layoffs during the pandemic but have been extended by the company.

In perhaps a sign that Mr. Diess has gotten the message that all the references to Tesla were bothering people in Wolfsburg, where Volkswagen has its headquarters, he referred to the company during Thursday’s news conference as “an American competitor building a plant in Grünheide,” — the location of Tesla’s nearly completed new factory — but refused to state the company’s name, even when asked about it specifically.

Instead, he kept on script about his excitement for the possibility of transforming VW, including plans to begin building an existing electric model, the ID.3, at the company’s headquarters starting in 2024, pending the introduction of the Trinity model, expected for 2026, for which a new factory will be constructed in Wolfsburg.

As part of a five-year plan, the board also approved further investments, including a new research and development center in Wolfsburg, where Volkswagen was founded in the 1930s. Overall, the automaker foresees spending 159 billion euros to update the company’s sites across Europe to supply and build electric vehicles.

Analysts generally credit Mr. Diess for coming up with the ambitious plan to move Volkswagen beyond the diesel scandal that had threatened the company’s future, and said the board was justified keeping him on as chief executive, despite the latest wave of uncertainty and worker discontent.

“Everything that was today in terms of major investments is based on the Diess strategy,” said Ferdinand Dudenhöffer, founder of the Center for Automotive Research in Duisburg, Germany. “He initiated the biggest restructuring in VW’s history and led VW out of the dark dieselgate past.”