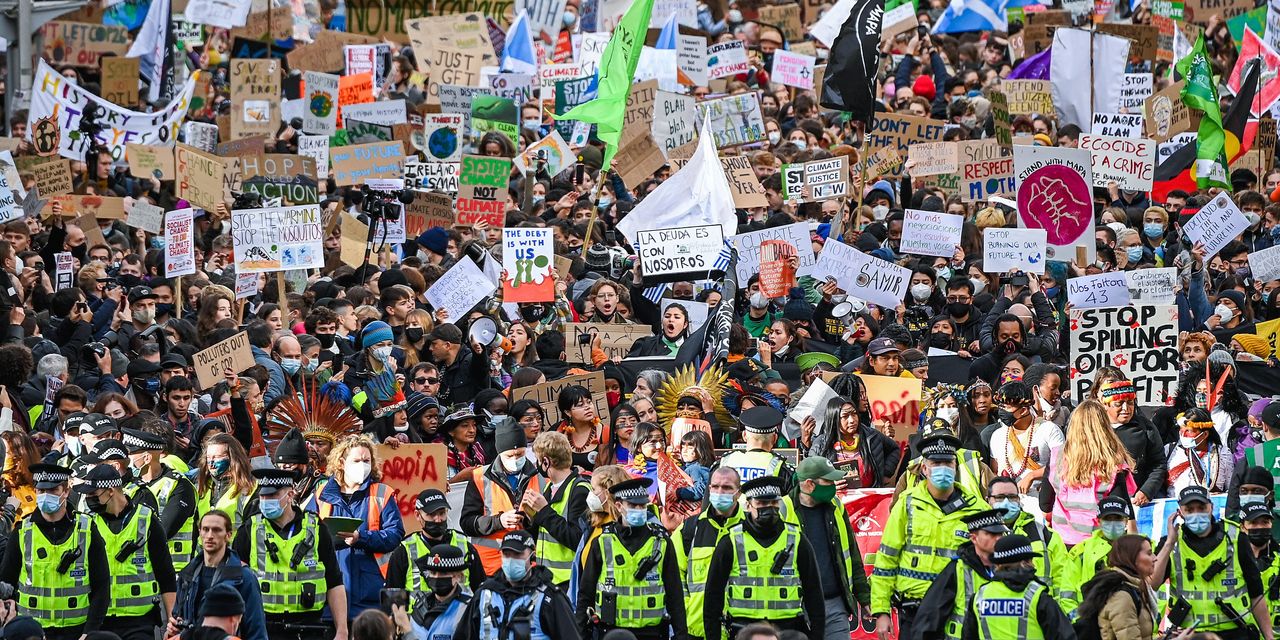 At the Glasgow climate summit in November, more than 140 countries announced goals to reach net zero greenhouse-gas emissions by 2050.

While uncertainty abounds over how or whether these pledges will be realized, one thing was clear: There’s a lot of money—from companies, institutional investors and individual investors—riding on a belief in the opportunities associated with a carbon-constrained world. On the sidelines of Glasgow, private investors were converging around new firms from a range of businesses that hope to profit from reducing emissions. There were satellite-enabled emissions-verification companies; firms that will pull carbon out of the air and mineralize it into stone that can be buried underground; companies that manufacture meatless food products from fungal-based mycoprotein; and more.

Investor demand for climate-friendly stocks has surged in the past couple of years. Tesla Inc., for instance, had a market value of more than $1 trillion as of Friday, up from $300 billion in the summer of 2020. Hydrogen-fuel-cell firm

a U.S. integrated solar firm, was near its five-year high at $97 a share, rising steadily from barely $30 at the start of 2017. Clean-energy ETFs hit more than $25 billion in total assets in the first half of 2021, making their ownership as preponderant of a trade as technology stocks were during the dot-com craze (although I’m certainly not implying an inevitable collapse).

Specialty funds aligned with environmental, social and governance (ESG) principles hit a record of $51.1 billion in new money in 2020, more than twice as much new money as flowed into such vehicles a year earlier, according to

Global sustainable-fund assets almost doubled in the past six months to $3.9 trillion at the end of September, according to Morningstar. The number of sustainable funds, as defined by Morningstar, jumped more than 51% in the third quarter to 7,486 funds. ESG funds, which often include screening for climate risk, now represent about a quarter of all funds invested in U.S. stock and bond mutual funds.

Hedge funds are also getting into the act, increasingly subscribing to data services that help them position their portfolios to take advantage of the greening of the economy. There are even a few funds that offer a climate-risk-focused strategy. Several academic studies have showed that going long or short on stocks based on negative or positive climate-related news can be a superior strategy for generating positive returns.

When it comes to investing in real, nonfinancial assets, the shift is even more stark. Private-equity firms that were previously focused on traditional oil, gas and coal assets are pivoting to green portfolios as a selling point to institutional investors, especially pension funds. The firms raised $52.2 billion for new renewable funds in 2020, up from $44.6 billion in 2019. That contrasts with conventional oil, gas and coal funds, which brought in $8.3 billion last year, down from $20.9 billion in 2019.

Pension and endowment funds, such as the University of California, are announcing specific targets for climate-change investments to satisfy climate-conscious stakeholders. The California State Teachers’ Retirement System announced this year its intention to put $1 billion to $2 billion in climate-friendly investments in private markets. Three of New York City’s pension funds plan to double investments in climate-change solutions to a total of $8 billion by 2025.

Still, perhaps the most dramatic change has been the number of special-purpose acquisition companies that have been set up in recent years to search for clean-energy targets and climate solutions. SPACs in clean energy have been all the rage this year, with investors committing to more than three dozen major clean-tech-sector deals.

In contrast to the money being made on this climate-change mania, fossil-fuel-company stocks have fallen out of favor. Even with $70 oil, oil and gas stocks barely make up 1% of the S&P 500, down from 4% a year ago and over 11% a decade ago. Oil’s poor showing has opened the industry to attacks from activist shareholders. The number of shareholder resolutions has been soaring in recent years, as activists demand planning for climate risks, approaches to methane leaks, and transparency on lobbying dollars.

Some oil companies responded to shareholder prodding by making relatively small, but visible investments into renewables, direct air capture and hydrogen. European companies have been most responsive. Activist shareholders are now demanding more.

lost a vote on replacement of three board seats.

recently agreed to give up board seats. Next up is

where activist shareholders want to break up the company. Shell has said its strategy and customers are best served by retaining its collection of assets.

Lawsuits have also hit some companies harder than others, as the damages from climatic events mount and affected parties seek compensation.

For traditional energy companies trying to decide what to do next, reward for pivoting has been unequal. Still, many of those companies feel they have no choice but to “future proof” assets to a greener energy environment, as one senior executive told me. Several companies have announced pilot programs to blend hydrogen into natural-gas streams to improve their carbon footprint.

For companies that believe that all this climate pivoting is wrongheaded, investors seem to decisively disagree. One reason: Any private company that doesn’t pivot to greener energy will have to compete in a tougher oil and gas neighborhood that includes low-cost producers like Saudi Arabia, Abu Dhabi and Russia. But even those state players are realizing that counting on future oil demand might be unwise. Saudi Aramco, Abu Dhabi National Oil Co. and Gazprom are also expanding their clean-energy portfolios. For all the big talk about oil’s staying power, momentum investments by the world’s more important oil exporters in renewables, hydrogen, ammonia and electricity speak to a very different story.

Ms. Jaffe is the author of “Energy’s Digital Future: Harnessing Innovation for American Resilience and National Security,” and a research professor at Tufts University’s Fletcher School. She can be reached at reports@wsj.com.