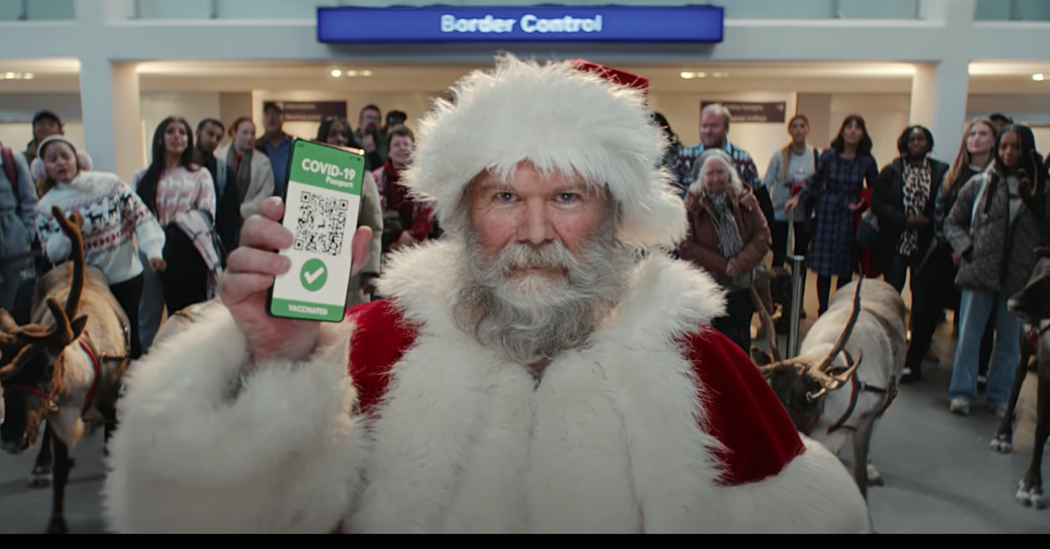 A commercial for the supermarket chain Tesco featuring Santa Claus wielding a vaccine passport was deemed acceptable by British advertising regulators after viewers submitted a near-record number of complaints that the spot promoted vaccination.

Most of the 5,000 complaints received claimed that the ad, which was posted in mid-November, tried to pressure viewers into getting vaccines and encouraged medical discrimination based on vaccine status, according to the Advertising Standards Authority.

Toby King, a spokesman for the agency, said on Thursday that the commercial “doesn’t break our rules and there are no grounds for further action.”

The Tesco ad, created by the Bartle Bogle Hegarty ad agency and set to a rendition of the Queen song “Don’t Stop Me Now,” shows people prevailing through various obstacles (a blackout, a closed mall, a produce shortage that leaves a snowman with an eggplant for a nose) to celebrate Christmas. A news anchor announces at one point that Santa might be quarantined, but then he shows proof of vaccination to a border control agent, inspiring cheers.

“While we understand that some people disagree with the vaccine program and may find the ad in poor taste, we have concluded that the ad is unlikely to be seen as irresponsible or cause serious or widespread offense on the basis suggested,” Mr. King said.

Tesco said in a statement that the ad took “a lighthearted view on how the nation is feeling.”

“We are still in the midst of a pandemic and the advert reflects the current rules and regulations regarding international travel,” the company said.

Amid concerns about a new coronavirus variant, Omicron, Britain has barred travelers from 10 African countries, required masks in shops and on public transportation and accelerated its rollout of vaccine booster shots, hoping to vaccinate every adult by the end of next month.

Another vaccine-related ad this year prompted a review by the Advertising Standards Authority. In late December, when vaccine rollouts were in their early stages, the Irish budget airline Ryanair began running commercials proclaiming “vaccines are coming” and showing young vacationers without masks or social distancing with text urging customers to “jab and go!”

The ad generated 2,370 complaints from viewers who felt that it was misleading, offensive and irresponsible, and that it implied that the majority of Britons would be successfully vaccinated by summer. (More than half of people 12 and older were fully vaccinated by the first week of June.) The Advertising Standards Authority banned the ads.

The Tesco holiday ad drew the second-highest number of complaints in the agency’s history. The leader is a commercial from 2014, in which the betting company Paddy Power took bets on the outcome of the murder trial of Oscar Pistorius, the Olympic sprinter who was eventually convicted of killing his girlfriend. The ad attracted 5,500 complaints and was banned.