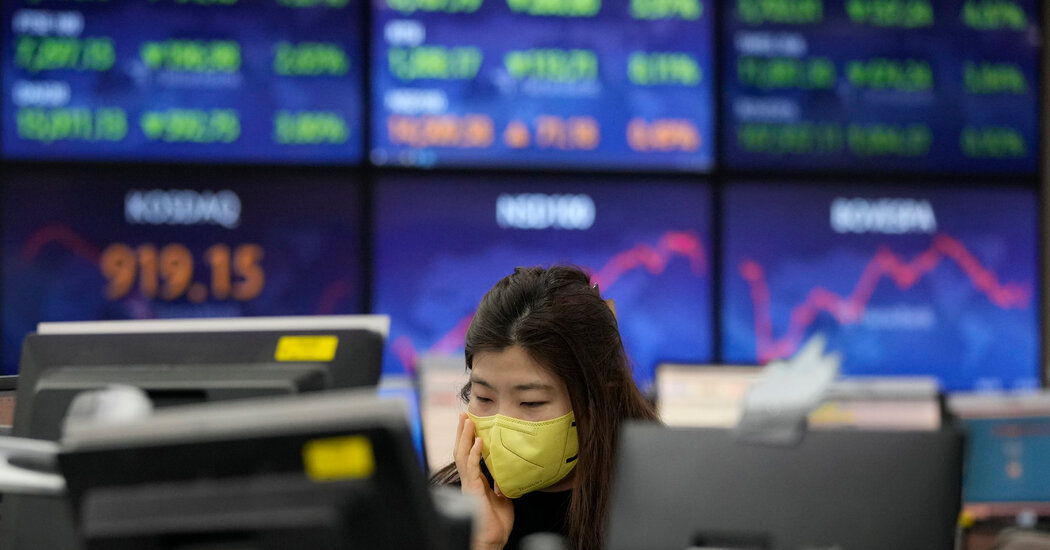 Aides to President Biden like to say he is transparent with the reporters who cover him.

In a hot-mic moment that may enter the annals of presidential insults, Mr. Biden directed an under-the-breath expletive on Monday toward Peter Doocy, the White House correspondent for Fox News, that was amplified by a live microphone onto television and laptop screens around the world.

The exchange came as reporters were being ushered away from a brief appearance by Mr. Biden in the East Room. Mr. Doocy called out a question: “Do you think inflation is a political liability in the midterms?”

Mr. Biden’s patience was low. And the volume was up.

“It’s a great asset,” the president said in a sarcastic tone, seemingly to himself. “More inflation. What a stupid son of a bitch.”

Mr. Doocy is a reliable needler of Mr. Biden, although the president often appears more amused than angered by their jousts. Their sometimes spiky exchanges have become a regular feature of Mr. Biden’s public appearances.

On Monday night, Mr. Doocy said on Fox News that the president called his cellphone about an hour after the incident and, in his words, “cleared the air.”

“He said, ‘It’s nothing personal, pal,’” Mr. Doocy told the host Sean Hannity. “We were talking about just, kind of, moving forward. And I made sure to tell him that I’m always going to try to ask something different than what everybody else is asking, and he said, ‘You got to.’”

When Mr. Hannity pressed on whether Mr. Biden had apologized, Mr. Doocy laughed and demurred. “Sean, the world is on the brink of, like, World War III right now with all this stuff going on,” he said. “I appreciate that the president took a couple minutes out this evening while he was still at the desk to give me a call and clear the air.”

It was hardly the first time that harsh language intruded on the typically PG-rated interactions between powerful politicians and reporters.

George W. Bush, while running for president in 2000, was caught on a live microphone using an epithet to refer to a New York Times reporter. (His running mate, Dick Cheney, was overheard affirming Mr. Bush’s observation: “big time.”)

During his vice presidency in 2010, Mr. Biden was heard using an expletive to convey to President Barack Obama that the signing of the Affordable Care Act was a big deal.

No accident was required for Americans to hear the insults lobbed by former President Donald J. Trump at his interlocutors in the press. Mr. Trump deemed Jim Acosta of CNN “a rude, terrible person,” called Jonathan Karl of ABC “a disgrace,” and said April Ryan, now of TheGrio, was a “loser,” to name but three examples. Among other moments, Mr. Trump once mocked the physical disabilities of a Times reporter to entertain his supporters at a campaign rally.

On Monday, Mr. Doocy shouted his question after Mr. Biden finished brief remarks at the start of a cabinet meeting focused on increasing the country’s economic competitiveness. When another journalist yelled out a query about Ukraine, Mr. Biden briefly complained that the reporters should ask questions about the topic at hand rather than about unrelated foreign policy.

Mr. Doocy, who along with the rest of the press corps was being led out of the room by White House staff members, pivoted to an economic query. Mr. Biden, who was still seated, appeared not to realize that the microphone in front of him was still broadcasting audio.

Speaking afterward on Fox News, Mr. Doocy recounted what happened with a lopsided grin. “I couldn’t even hear him because people were shouting at us to get out,” he said.

Dana Perino, a Fox News host who served as White House press secretary under Mr. Bush, told Mr. Doocy that he should embrace the moment. “You might even have a book title,” she joked.

Last week, at another White House event, Mr. Biden expressed frustration with another Fox News reporter, Jacqui Heinrich, who had shouted out a question about the president’s approach to the tensions between Russia and Ukraine.

“Why are you waiting on Putin to make the first move, sir?” Ms. Heinrich asked. Mr. Biden quietly replied: “What a stupid question.”