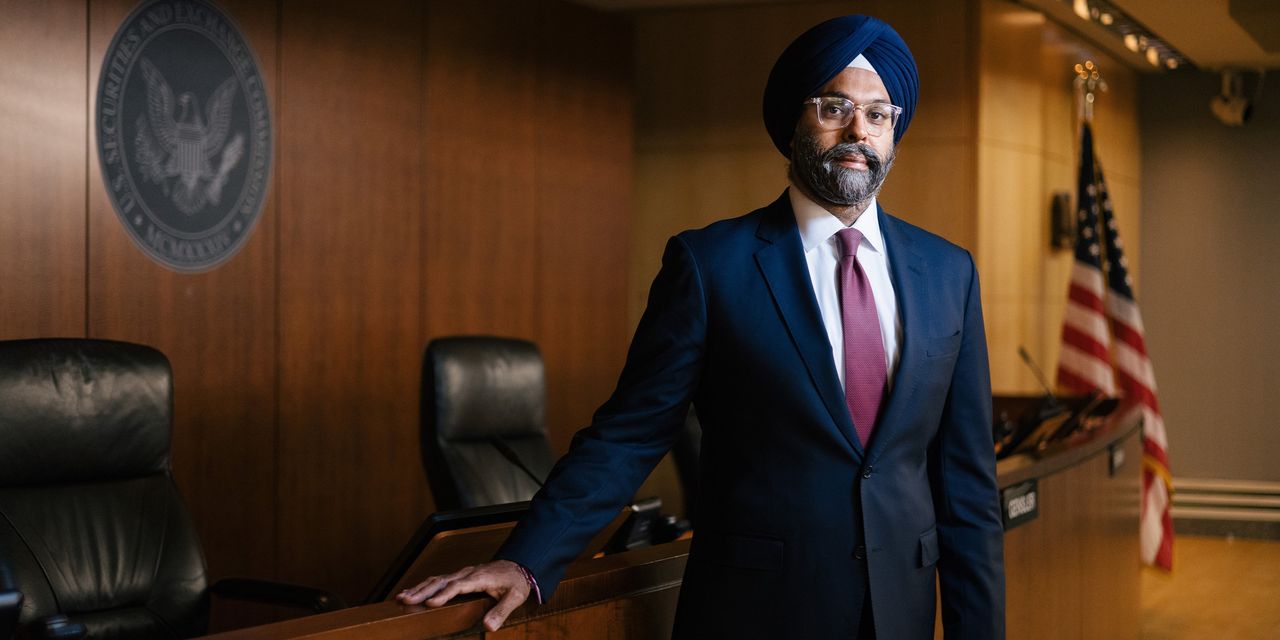 WASHINGTON—The Securities and Exchange Commission often picks its top cop from the ranks of Wall Street’s best defense lawyers. Its newest one hadn’t worked on a securities case in almost six years until he took on the job in July.

became the director of the SEC’s enforcement program after serving as New Jersey’s attorney general for more than three years, during which he overhauled police use-of-force training and disciplinary transparency, spoke out against Asian-American hate crimes, and took personal heat for how state officials dealt with the coronavirus pandemic.

Since taking over at the Wall Street watchdog, Mr. Grewal has signaled higher fines for wrongdoing are on the horizon, along with efforts to remove more malefactors from Wall Street jobs. “We can’t arrest them,” Mr. Grewal said in an interview. “We can get them out of the industry.”

“‘We can’t arrest them. We can get them out of the industry.’”


— Gurbir Grewal on efforts to remove malefactors from Wall Street

Mr. Grewal’s long career in government, where he navigated partisan politics and managed a large number of law-enforcement agencies and personnel, is rare for an SEC enforcement chief. The agency’s head enforcer, one of its highest-profile figures, is usually a former prosecutor who rose to the top ranks of the defense bar, where they battled with the SEC and Justice Department on behalf of corporate clients.

Mr. Grewal, 48 years old, was a federal prosecutor in New Jersey and New York before he was tapped by two governors—one Republican and one Democrat—to oversee law-enforcement agencies in his home state of New Jersey. Those posts raised his profile and made him one of the country’s most prominent Sikh Americans.

“I don’t think he has ever tried to be a politician, but he ends up succeeding in the way a politician succeeds,” said Jud Welle, a former prosecutor and colleague of Mr. Grewal who now leads cybersecurity investigations at Nardello & Co. “He treats people with respect and takes care to not hustle through an interaction just because people may not be serving his immediate interest.”

Mr. Grewal was born in Jersey City and grew up in the state’s northern suburbs. Diplomacy was his first choice of career after graduating from Georgetown University, he said, but a federal hiring freeze in the mid-1990s blocked that path. He found his calling after Sept. 11, 2001, when hundreds of Sikh Americans were victims of racial profiling and violent attacks committed by people who said they were taking revenge over the terrorist attacks. (Practicing Sikh men wear a turban and a beard. Their faith, based on the worship of one God and a belief in social justice and equality, is the fifth-largest independent world religion.)

Then a young lawyer in private practice, Mr. Grewal said he absorbed racist taunts directed at him as he walked around downtown Washington a few days after 9/11. At his law firm, he felt excluded from client meetings before finding a mentor who helped him advance. He decided to become a federal prosecutor, believing he could change people’s misunderstandings and biases as a member of law enforcement.

Adam Abensohn, a friend from their shared time in the Brooklyn U.S. attorney’s office, said Mr. Grewal was a clever and resourceful young prosecutor whose ability to connect with people and earn their trust set him apart.

“He said something that stuck with me: that he took a tremendous amount of pride in standing in front of a jury and saying he represented the United States, and causing some people who might be surprised by that to see that someone who looks like him can represent the U.S. and represent the very best of us,” Mr. Abensohn said.

Later, as a federal prosecutor in Newark, N.J., Mr. Grewal led the economic-crimes unit, including overseeing the prosecution of traders who illicitly obtained market-moving corporate news stolen by hackers. He also won a case against convicted Ponzi schemer Eliyahu Weinstein, whose 24-year sentence was commuted in January by then-President Donald Trump. Mr. Grewal wrote on Twitter at the time that he was “disgusted” by Mr. Trump’s move, saying it was “one huckster commuting the sentence of another.”

In 2018, Mr. Grewal became the country’s first Sikh state attorney general when Democratic Gov. Phil Murphy elevated him from Bergen County prosecutor, a role to which he was nominated by former Republican Gov. Chris Christie. As attorney general, he implemented new use-of-force policies for New Jersey’s 37,000 police officers and intervened in a case to preserve deportation protections for immigrants enrolled in the Deferred Action for Childhood Arrivals program, which a federal judge invalidated in July.

He also oversaw the state’s securities regulators but didn’t directly work on their cases. Just after Mr. Grewal left state government to work for the SEC, New Jersey became the first state to order BlockFi Inc., a well-known cryptocurrency company, to stop offering unregulated interest-bearing accounts for crypto deposits. The state said BlockFi failed to treat the product as a security, which would have required registration with the state.

BlockFi has said the accounts are legal and continue to be allowed in New Jersey while the company discusses the matter with the state.

Working in New Jersey’s political system was grueling, Mr. Grewal said, and he was considering his future when a top adviser to SEC Chairman Gary Gensler contacted him in May. The agency needed a new enforcement director when Mr. Gensler’s first choice for the job resigned after a judge questioned her conduct in a lawsuit involving Exxon Mobil Corp.

“‘Maybe when you see people like me in this position, a law firm is more attentive to diversity issues and it’s OK. Because when I was there, I felt like it wasn’t OK to look like me.’”

Several progressive economic-policy groups cheered Mr. Grewal’s hire, having criticized Mr. Gensler’s first choice for director because her experience mostly involved representing businesses in legal battles. Other experts say Mr. Grewal’s lack of experience in the private sector could make him too prone to punish misconduct as intentional when it really stemmed from mistakes or negligence.

“That is where you see pro-regulatory and pro-prosecutorial attitudes sweeping too broadly, and that affects the efficiencies of the market,” said Andrew Vollmer, a former SEC deputy general counsel now affiliated with the Mercatus Center at George Mason University. “The big concern about Grewal is he has a prosecutor’s mentality.”

Since joining the SEC, Mr. Grewal has given several speeches talking tough about the future of enforcement, including that penalties might have to go up if firms or individuals are repeating bad acts that the SEC has regularly punished.

Is the SEC doing enough to regulate the financial industry? Join the conversation below.

Speaking to the New York City Bar Association last month, Mr. Grewal said some Americans have grown cynical about how business and government agencies interact, partly due to “the perception that we, the regulators, are failing to hold them appropriately accountable, or worse still, the belief by some that there are two sets of rules.”

Tougher sanctions might help combat that view, he said. The SEC will seek to require some defendants to admit to wrongdoing when they settle, a tactic the agency tried during the Obama administration but used infrequently because admissions can hurt companies in related private litigation. (SEC defendants customarily settle cases without admitting or denying the agency’s claims.)

Mr. Grewal said he won’t be a spokesman for the big social and political issues he confronted as attorney general. But “as a visible minority,” he can still have an impact on how American corporations and big law firms practice inclusion.

“Maybe when you see people like me in this position, a law firm is more attentive to diversity issues and it’s OK,” he said. “Because when I was there, I felt like it wasn’t OK to look like me.”

Write to Dave Michaels at dave.michaels@wsj.com