Bitcoin sold off hard during Q4, but then during the first frame of 2022 it underwent a period of relatively directionless trading. Contracting price action over the last three months could continue to make things even choppier in the near-term, but given the nature of volatility (expanding/contracting) and the fact that this is BTC, volatility is likely to ramp up again as we head towards the middle of the year.

Which direction it goes remains undecided, but the higher low in February relative to the yearly low in January suggests we may see a top-side breakout. If this is the case, it will be intriguing to see how much buying interest comes in. Will the recent lows lead to a new surge to another record high, or could BTC stall out — hanging between the record highs over 68k and the Q1 low just under 33k?

Excitement has fallen in recent months, so this could be a critical test of the market from a psychological standpoint. Typically once BTC gets rolling it doesn’t take long to muster a fresh level of market interest. If we were to see that fail to be the case this time around, then it could mean that BTC is headed for an extended period of sideways price action, or worse. 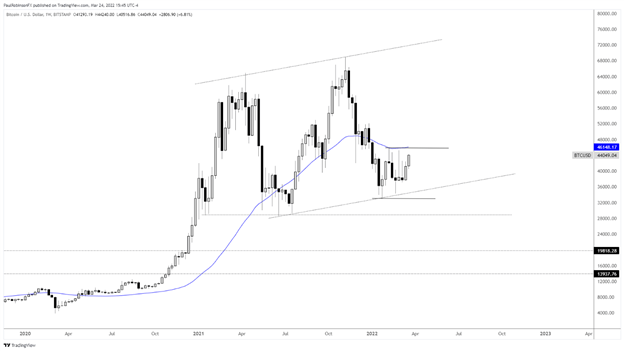 Reclaiming the 40-wk moving average on the upside will be the first hurdle to cross, along with the Feb. high at 45850 and yearly high at 47989. From there we should get a better idea of whether or not interest is going to show. On the downside, taking out the yearly low at 32950 will have big support in play at 28600. This is considered a major threshold for Bitcoin to hold if it is to keep from turning into a slowly deflating bubble.