Those variant concerns are likely to further recede in the coming weeks, assuming preliminary reports are accurate. However, prices may not return to highs seen back in October just yet. The coordinated efforts between the US, China, and other non-OPEC countries to release strategic reserves are likely to hang over the markets for now. Bids to the US Department of Energy were due earlier this week as the government prepared to release the first round of SPR barrels.

Oil may continue to gain ground as Covid risks further subside. OPEC’s leader, Saudi Arabia, raised its monthly price earlier this week, suggesting stronger confidence in current prices. OPEC remains on track to increase production by 400k barrels per day in January. Traders will be eying US inventory data over the next 24 hours from the Energy Information Administration (EIA).

The EIA’s updated short-term energy outlook (STEO) released earlier this week shows a lower price forecast in 2022 around $70 per barrel. EIA Acting Administrator stated the current market is extremely complicated, leaving the door open to swings in the forecast as Omicron and the surrounding information change. The American Petroleum Institute reported a draw of just over 3 million barrels for the week ending December 3.

Oil prices traded back above the 70 psychological level, 200-day Simple Moving Average (SMA) and the 61.8% Fibonacci retracement. That puts bulls in a position to attack a trendline from earlier in the year that previously provided support. The falling 26-day Exponential Moving Average (EMA) may add to that resistance. Meanwhile, the MACD line appears to be on track to cross above its signal line, a bullish sign. 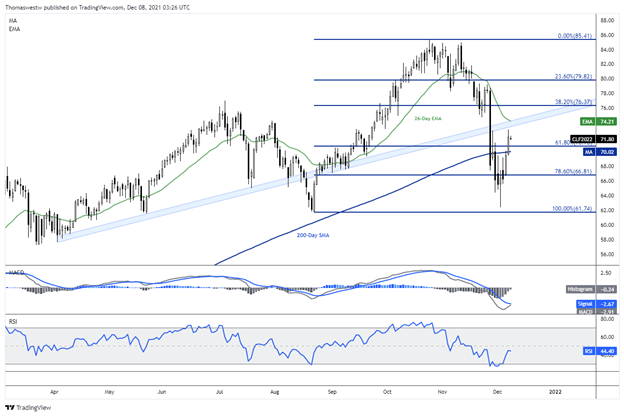