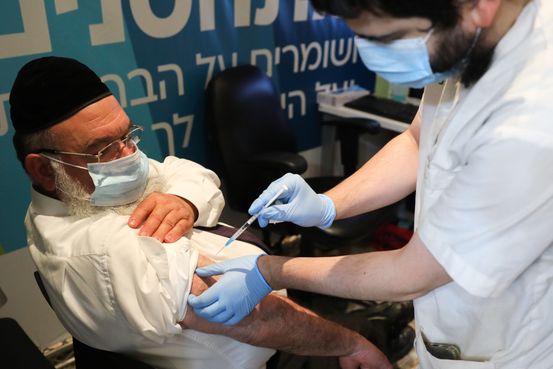 Covid-19 vaccine provides good protection against severe illness from the Omicron variant, while those without a third shot are highly vulnerable, according to a new Israeli study.

The findings, similar to those announced last week by Pfizer, suggest countries worried about Omicron’s rapid spread will be able to defend their populations with continued inoculation.

Get a morning briefing about the coronavirus pandemic three times a week and a weekly Health newsletter when the crisis abates.

Researchers at the Sheba Medical Center and from the Israeli Health Ministry examined the blood samples of 20 Sheba employees who received a booster at least a month ago, and 20 employees who are five or six months past their second shot and haven’t received a third shot.

Employees who had received a booster showed a level of neutralization against the Omicron variant about 100 times higher than the two-shot group. However, among those with booster shots, neutralization levels were four times lower against Omicron compared with Delta, still the most prevalent strain of the virus circulating globally.

The study’s takeaway: Individuals who received boosters may be more likely to be infected with Omicron than other variants, but they will be unlikely to develop severe illness or be hospitalized, said Gili Regev-Yochay, director of the infectious-disease epidemiology unit at Sheba Medical Center, in a news conference Saturday night.

The study’s bad news, said Dr. Regev-Yochay, is that people who got a “second dose of the vaccine five to six months ago don’t have any neutralizing ability.”

“If you’re past five months and didn’t get a booster, go get it,” Dr. Regev-Yochay said.

Those in the two-shot group still showed some protection against the Delta variant. The findings will soon be published in the New England Journal of Medicine. The study was based on a few dozen blood samples, Dr. Regev-Yochay said, calling it a “relatively nice size” for such a study.

The studies by Israeli researchers and Pfizer, and one by scientists in South Africa, where the Omicron variant was first detected, suggest that three doses will be needed to produce the effective immune response against Omicron that was provided by just two doses against earlier virus strains.

The Israeli study’s authors said their effort was the first to combine a real sample of the Omicron variant grown in a lab with blood samples from individuals who received a booster shot. The Pfizer research was conducted on a pseudovirus meant to mimic the real one.

Pfizer and BioNTech are working on an Omicron-specific vaccine that they hope to have available by March 2022 if the variant becomes widespread by then. Researchers started working on the new vaccine on Nov. 25, shortly after Omicron was identified.

Corrections & Amplifications
Researchers examined a group of blood samples from 20 Sheba employees who received a booster at least a month ago. An earlier version of this article incorrectly said they received it within the past five to six months. (Corrected on Dec. 12)