Nicaragua Breaks Off Ties With Taiwan, Switching Allegiance to Beijing 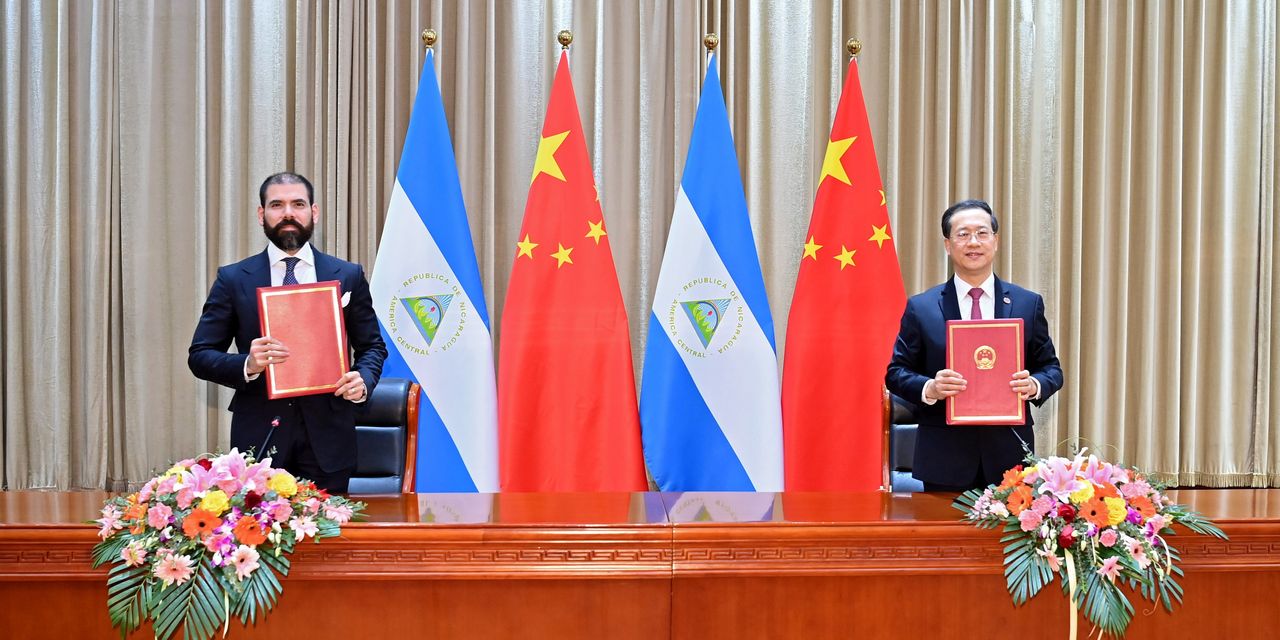 TAIPEI—Nicaragua has cut diplomatic ties with Taiwan in favor of China, denting the democratically self-ruled island’s effort to expand its international profile amid opposition from Beijing.

“In the world, there is only one China,” Nicaraguan Foreign Minister Denis Moncada said in a televised address on Thursday local time, repeating Beijing’s position that Taiwan is a part of China.

The decision by the Central American nation whittles Taiwan’s number of diplomatic partners to 14, including the Vatican. Taiwan’s Foreign Ministry expressed displeasure with the choice of Nicaraguan President

to switch recognition to Beijing in a statement on Friday, and said it would immediately cease assistance programs and clear out its embassy in Managua.

“President Ortega’s government disregarded the friendship of the two countries built on years of standing together through thick and thin, and we regret it very much,” the statement said.

Delegations from China and Nicaragua held talks in the Chinese city of Tianjin on Friday, according to Chinese state media. “This is a correct choice that conforms with trends and the people’s will,” China’s Foreign Ministry said in a statement.

China’s Communist Party, which has never ruled in Taiwan, has tried to isolate the island of 24 million people internationally in part by luring away its few remaining diplomatic partners. Nicaragua is the eighth country to cut ties with Taiwan since Tsai Ing-wen became Taiwan’s president in 2016.

“The more successful Taiwan’s democracy is, the more international support it has, the greater the pressure from the authoritarian camp,” Ms. Tsai said at a Friday event in Taipei. “Our determination to participate in the international democratic community will not be disturbed by threats and intimidation.”

Nicaragua’s decision marks a setback for Taiwan following a string of diplomatic successes over the past year, including increasing shows of support from the U.S., Japan, the U.K. and other democratic powers. The island’s success in combating the Covid-19 pandemic, despite being barred by Beijing from fully engaging with the World Health Organization, has also helped bolster its global stature.

Concerned in particular by closer ties between Taipei and Washington, Beijing has intensified its pressure on Taiwan over the past year. Those efforts have included sending hundreds of military aircraft on sorties near the island.

said the decisions of Mr. Oretga, who claimed a re-election victory last month after jailing seven would-be presidential candidates, shouldn’t be seen as reflecting the will of Nicaraguans.

“This deprives Nicaragua’s people of a steadfast partner in its democratic and economic growth,” Mr. Price said in a statement, urging like-minded countries to expand their engagement with Taiwan.

Nicaragua’s announcement comes as representatives from Taiwan participate in the inaugural Summit for Democracy, a two-day virtual gathering of democratic governments organized by the Biden White House that kicked off Thursday. Mr. Biden’s invitation to Taiwan irked Beijing, which accused the U.S. of providing a platform for the promotion of Taiwanese independence.

“The timing is a bit suggestive,” said Kharis Templeman, a research fellow at the Hoover Institution at Stanford University. “It may have been in the works for a while and it decided to do it now, partly to punish Taiwan or the Biden administration, or both for their democracy summit.”

Ma Xiaoguang, a spokesman for Beijing’s Taiwan Affairs Office, reiterated China’s stand on Taiwan, saying it “welcomes Taiwan’s few remaining so-called ‘diplomatic partner countries’ to recognize the trend and stand on the right side of history.”

The last time Taiwan lost diplomatic partners was in 2019, when the Pacific nations of Kiribati and the Solomon Islands both switched recognition to Beijing from Taipei as Ms. Tsai was fighting for re-election. She won by a decisive vote.

Despite the latest loss, Taiwan has expanded its unofficial diplomatic relationships over the past year, especially in Central and Eastern Europe. In August, Lithuania, which has diplomatic relations with Beijing, allowed Taiwan to set up a de facto embassy in Vilnius. Many countries have allowed Taiwan to do the same, referring to the de facto embassies as “Taipei” offices. But Lithuania let Taiwan call it a “Taiwanese” office, upsetting Beijing.

“There’s been a lot of progress for Taiwan in the past few years that’s much more beneficial, and it should outweigh anything that happens on the formal diplomatic side,” he said.

Write to Joyu Wang at joyu.wang@wsj.com