Molson Coors Decided to Reopen Its Offices. Things Got Complicated. 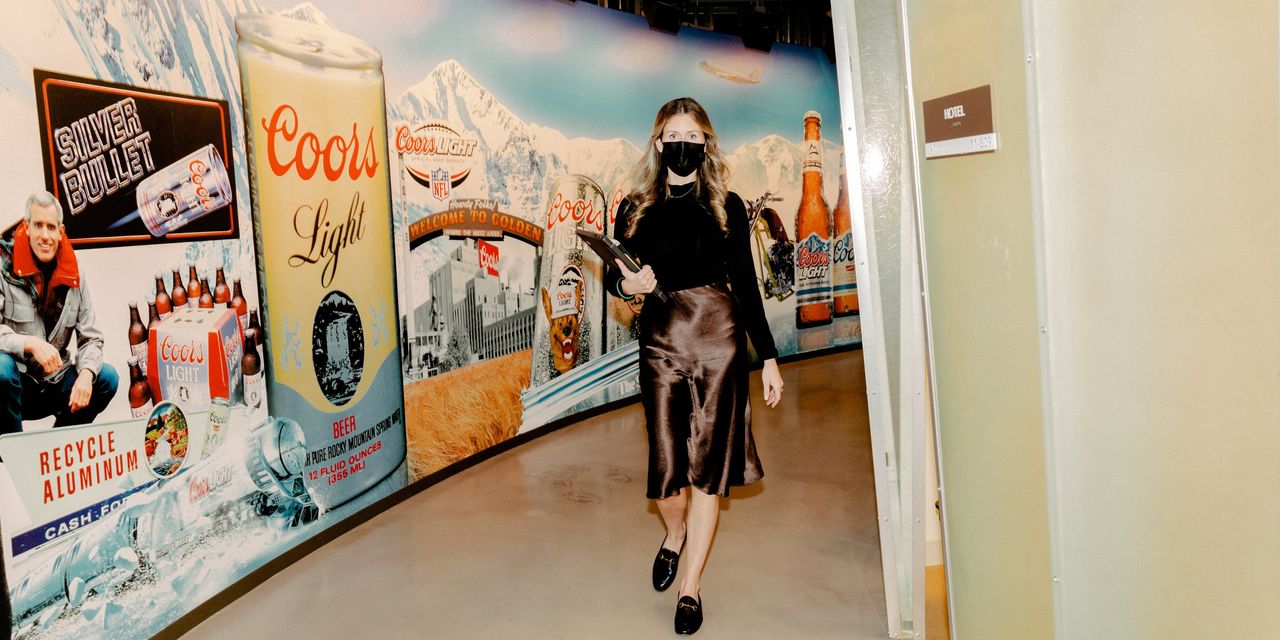 Molson Coors Beverage Co. learned some lessons after bringing corporate employees back to their offices in October. Color-coded wristbands can help colleagues signal their openness to a hug. It’s important to schedule 10 minutes of travel time between meetings. And it’s tough to get some people into meeting rooms with masks if they can join a video call without a mask from their desk.

The company, which makes Coors Light and Miller Lite beer, closed its corporate offices in March 2020 when Covid-19 emerged, sending thousands of employees home. Early this year, the brewer began planning for their return.

The most difficult decision, Chief Executive

said, was adopting a vaccine mandate for 2,200 corporate employees in the U.S. The company did so in August, a month before President Biden announced a vaccine directive for companies with more than 100 employees. The White House’s policy is now temporarily blocked by a federal appeals court.

The CEO said he believed Molson’s vaccine mandate was crucial for making employees feel safe enough to return to the office but worried staff would quit. “How many folk would leave?” he said in a recent interview. “We just didn’t have the answer to that.”

In the end, few did. Less than 1% of U.S. corporate staff left the company, either because of the vaccine requirement or because of the mandatory return to offices, Molson said.

What Molson and many other companies are discovering is that returning to an office isn’t one event. It requires a series of decisions, some of which have to be revisited to keep pace with new developments. Many are still grappling with when and how to bring workers back as the emergence of the Omicron variant prompts new travel restrictions and some delays in office reopenings.

Molson recently told the U.S. corporate staff the company will require vaccine boosters, a decision that was under way before the variant became widely known. Molson hasn’t changed its U.S. office or travel policies because of Omicron. But employees who returned in November to Molson’s U.K. office in Burton-Upon-Trent, England, will be working remotely again starting Monday under the U.K.’s latest work-from-home order.

‘You couldn’t communicate too much’

Molson, based in Chicago, has 17,000 employees around the world. In March 2020, when the brewer sent its corporate staff home, the company’s leaders hoped they would be able to celebrate the reopening of their offices that year by the Fourth of July. Molson’s manufacturing employees continued to work at its breweries throughout the pandemic with social-distancing protocols and other Covid-19 safety measures. The corporate staff, meanwhile, worked from home for more than 18 months.

Mr. Hattersley wanted to bring his corporate employees back five days a week. But through employee surveys, virtual chats with the CEO and other employee forums, Molson heard from workers who said they valued the flexibility of working from home. On top of that, many were afraid that returning to the office wasn’t safe. Others had concerns about securing child care and handling unexpected school closures.

The Molson leadership team early this year discussed a four-day-a-week plan, then settled on a schedule of three mandatory days a week in the North America offices. All corporate employees in the U.S. and Canada would have to report to their office on Mondays, Tuesdays and Thursdays. With everyone in the office on the same days, colleagues could more effectively meet and collaborate in person, the company’s leaders reasoned.

“I like people being together and this time last year, I would have probably thought we’d be back five days a week,” said Mr. Hattersley, 59, a South Africa native who joined the company in 2002 and became CEO in 2019. “But the world has moved on from that process. And as a leadership team, as a company, we moved along with it. That just wasn’t going to work. It wasn’t what our people needed and it wasn’t where the world is.”

Communicating that plan—and explaining it—became Molson’s next big challenge. The company realized that employees with children needed a long lead time to prepare for new work and child care routines. So Molson told its U.S. staff in April about the three-day-a-week plan, and set a Sept. 7 reopening date for the U.S. offices. About 800 staff in North America would be reporting to offices where they had never worked before.

Molson distributed detailed memos on the reopening plans, tipsheets for hybrid working, guides to its offices and answers to questions that employees submitted by email. Mr. Hattersley hosted monthly sessions in which he answered questions in a virtual chat room.

“You actually couldn’t communicate too much,” he said. “You can’t just assume that people are going to understand what your rationale is.”

Employees wanted to know whether going back to the office would put them or their families at risk. Many had children who weren’t yet eligible for vaccination.

To address those concerns, Mr. Hattersley in August decided to adopt a vaccine mandate for all 2,200 U.S. corporate employees with the exception of about 35 unionized clerical staff, and pushed back the reopening date to October to allow time for employees to be fully vaccinated. Most unionized clerical workers were vaccinated; others would have to be tested weekly for Covid-19. All new U.S. hires, including in the breweries, would have to be vaccinated, as would visitors to Molson’s U.S. offices.

Some employees were upset by the announcement. Others welcomed the vaccine mandate but worried about the safety—or length—of their commutes on public transportation.

Some parents with babies and toddlers said they would have preferred a schedule with just two mandatory days in the office so they could spend more time at home. Sara Welch Goucher, an e-commerce director in the Chicago office, was one of them. During the day, a caregiver watches her nearly 1-year-old daughter and 2-year-old son in their home in Wheaton, Ill. Mrs. Goucher said her commute to downtown has increased to 90 minutes from 70 before the pandemic because trains on her route are running less frequently now.

“I got used to seeing my children in little moments between meetings,” said Mrs. Goucher, who is 35 and has worked at the company for three-and-a-half years. “But I do want some time in the office. It gives me a different kind of energy.”

In interviews with more than a dozen workers and executives, employees said they were excited to see their colleagues in person again. The team planning the U.S. office return decided against a party atmosphere for the first day back and went low key, said Jackie Heard, a human-resources executive who helped lead the effort. Gone was the idea of a barbecue and music. Instead, the company offered free coffee and doughnuts when employees arrived.

Workers found welcome packs with hand sanitizer, stress balls and handwritten notecards on their desks. Company leaders greeted people throughout the first day. Members of the IT team also circulated, ready to help as people struggled to connect to Wi-Fi networks and printers.

In the marketing department at the company’s Chicago headquarters, staff could pick up a wrist band in green, yellow or red to indicate when they were open to a hug or high-five, or preferred an elbow bump or a wave. Molson’s U.K. office offered green, yellow and red lanyards for the same purpose.

Josh McDonald, a Coors Light marketing manager who took a new position and relocated during the pandemic from Florida to Chicago, chose a green wristband. He had never met his teammates in person.

] Teams, like, in 3-D,” said Mr. McDonald, 35, who has worked at the company for four years. “There was a lot of soft-stepping” as colleagues gauged whether to go in for a hug.

“I’m a hugger but I didn’t want to invade somebody’s bubble,” he said.

Susan Waldman, 56, a global business process owner in Molson’s global business services department, was eager to see her colleagues again and the vaccine mandate made her feel safer about the reopening, she said. But she was disappointed the mandate didn’t cover Molson’s brewery workers or clerical staff. “I feel like everyone needs to do their part,” she said.

Molson said the breweries allowed for social distancing in a way that its offices didn’t, and that the brewery workers had demonstrated that they could keep working safely during the pandemic.

Back in an office for the first time in more than a year and a half, employees had to learn all over again some of the tricks and habits of office life. Among them: Don’t forget your cellphone charger or your office ID badge. They also discovered that they needed to schedule 10 minutes between in-person meetings to walk from one to the next.

The company is asking employees to use office days for in-person collaboration and remote days for focused, individual work. Working from home is optional on Wednesdays and Fridays, and so far most employees are doing just that, the company said. The company has distributed guides for supervisors on managing hybrid work, and has instructed them to intervene if they see anyone being excluded from a meeting or a decision because he or she isn’t physically present. Mr. Hattersley generally works from home on Wednesdays and Fridays to set an example, Molson said.

One hiccup is that many employees are conducting meetings by videoconference at their desks, where they can remove their masks, rather than gathering in conference rooms, where they must wear masks.

“We can do a better job at that,” said Ms. Heard, the human resources executive. “Encouraging people to get out of their offices and having interactions is going to be important for us.”

Sarah Irizarry, a 30-year-old marketing manager in the Chicago office, is wrestling with those requirements. Sitting in a conference room for a video meeting with a marketing agency while wearing masks presents a “double barrier,” she said. Mrs. Irizarry said she preferred to sit at her desk without a mask for those meetings and was trying to schedule them on her days at home.

Most Molson workers embraced the company’s new approach to office life. One sign is the level of activity inside pubs in the Chicago and Milwaukee offices. They now buzz in the late afternoons as colleagues catch up with one another over beers.

Write to Jennifer Maloney at jennifer.maloney@wsj.com