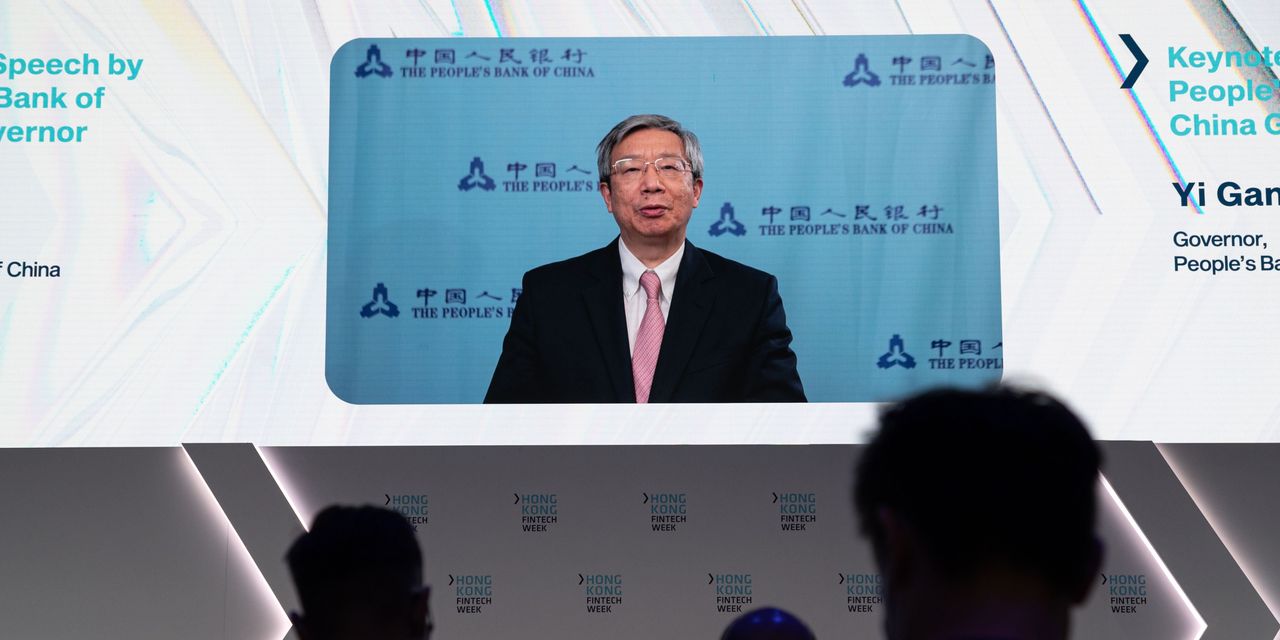 and a few of its peers won’t cause longer-term damage to the Hong Kong market, and broader problems with debt at Chinese property developers should be dealt with according to market principles, China’s top central banker said.

Hong Kong-listed Evergrande, which is one of China’s largest developers and has close to $20 billion in U.S. dollar bonds outstanding, didn’t make overdue payments on some bonds before a final deadline Monday, potentially setting the stage for Asia’s largest default. Fitch Ratings downgraded Evergrande and two key subsidiaries to a “restricted default” rating on Thursday, citing the missed coupon payments.

A few days before the nonpayment, Evergrande sought government help after warning that it might be unable to pay a $260 million debt it had guaranteed. The 25-year-old conglomerate, which had been teetering on the edge of failure for months, also said for the first time that it was open to negotiating a restructuring with offshore creditors.

governor of the People’s Bank of China, said that while Evergrande’s recent warning might have worried some Hong Kong investors, the city was a well-developed financial center with a well-defined legal framework for handling such issues.

“The risk caused by a few real-estate firms in the short run would not undermine the market for the medium and the long run,” Mr. Yi said in video remarks delivered to a seminar held with the Hong Kong Monetary Authority, the city’s de facto central bank.

Mr. Yi added that the Chinese central bank was committed to a level playing field for investors. “Companies issuing bonds overseas and their shareholders will be urged to properly handle their debt issues and meet their debt obligation in accordance with law and market principles,” he said. “This is a market event. It should be handled in the market-oriented way, based on law.”

“The rights and the interest of creditors and shareholders will be fully respected, in accordance with their legal seniorities,” the central banker said.

Prices for dollar bonds issued by Evergrande and other developers with low credit ratings have plunged in recent months, as investors have moved to price in a high likelihood of not being paid back in full. Evergrande’s 8.75% bonds due 2025 were quoted Thursday at 20 cents on the dollar, according to Tradeweb. Shares in Evergrande and many of its peers have also tumbled this year.

Mr. Yi on Thursday also threw his institution’s weight behind Hong Kong’s role as a financial hub. “The People’s Bank of China has been, and will continue to be, a supporter of Hong Kong’s development as an international financial center,” he said.

Beijing is supporting Hong Kong as a financial hub even as it asserts tighter political control, partly by giving the city more ways to act as a conduit between China and international markets. Recent months have brought the launch of a cross-border investment program for individuals known as Wealth Management Connect and the opening of a channel for offshore bond trading by mainland investors.

On Monday, the PBOC eased policy slightly by cutting the amounts that banks are required to hold as reserves. Some economists said the move could signal the start of an easing cycle that is meant partly to offset the damage from a property-market slowdown.

The central bank and other Chinese institutions have previously stressed their support for the healthy development of China’s property market and argued that Evergrande’s challenges are self-inflicted. The PBOC has said Evergrande’s problems can be contained and urged respect for market principles.

Write to Quentin Webb at quentin.webb@wsj.com and Jing Yang at Jing.Yang@wsj.com