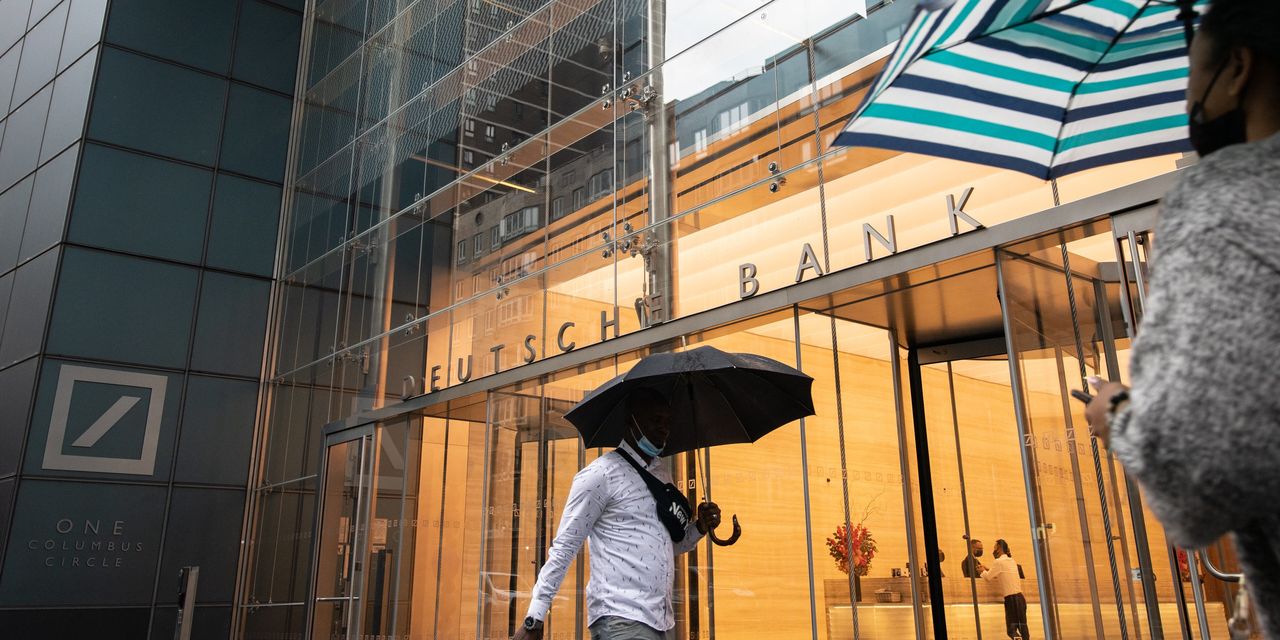 The Justice Department has informed

that the German lender may have violated a criminal settlement when it failed to tell prosecutors about an internal complaint in its asset-management arm’s sustainable investing business, according to people familiar with the matter.

The complaint alleged that the asset manager, DWS Group, overstated how much it used environmental, social and governance criteria, known by the industry acronym ESG, to manage its assets. U.S. authorities learned of the issue in an August Wall Street Journal article, rather than from the bank, which had ongoing disclosure and compliance obligations under the earlier criminal settlement, according to people familiar with the matter.

That earlier criminal settlement was struck in January and related to Deutsche Bank’s involvement in overseas corruption and market-manipulation. Deutsche Bank agreed to pay $130 million and entered into a deferred-prosecution agreement, which allows companies to avoid being indicted in exchange for staying out of trouble for a period of several years and flagging any potential problems as soon as the bank finds out about them.

If U.S. authorities pursue Deutsche Bank for a breach of the agreement, the bank could lose its earlier deal and, in the worst case, face indictment and prosecution, according to the agreement.

Authorities also could decide against taking the bank to court, and instead ask it to pay an additional fine and make other changes, such as hiring an outside monitor to dig into the bank’s business and review its compliance efforts.

A final decision has yet to be made, the people familiar with the matter said.

According to the January settlement, prosecutors are supposed to give written notice before launching a prosecution, and the bank is allowed to provide its own feedback on how it dealt with the alleged violation.

A Justice Department spokesman didn’t immediately respond to a request for comment.

Justice officials have said in recent months that they plan to call out companies for breaches of deferred-prosecution agreements, which allow companies to avoid a guilty plea but require them to admit wrongdoing. Some critics argue the leniency deals are used too often, particularly when the government doesn’t bring charges against employees who committed the misdeeds.

“You are going to see, in the days and weeks to come, a desire and a focus on making sure companies are living up to those commitments, and when they don’t, there will be consequences,” Deputy Attorney General

said at the Journal’s CEO Council event this week, without naming individual companies.

Any Justice Department move would be a costly setback for a bank that has been trying to improve its relationship with U.S. regulators and show investors it is a reformed institution following years of legal troubles.

For years Deutsche Bank was considered one of the world’s most troubled banks. In the U.S. it paid hefty fines over money-laundering and mortgage-securities scandals. Also hanging over Deutsche Bank was its longtime role as lender to former President

which put the bank in the middle of political fights and congressional investigations.

and other lapses. Deutsche Bank said at the time it had learned from its mistakes in the case.

The problems in its asset-management arm emerged earlier this year. DWS’s former head of sustainability,

sent an email outlining her concerns about the company’s ESG claims to two executives of Deutsche Bank in March, according to a copy of the email seen by the Journal.

While DWS is a separately listed company in Germany with its own management, Deutsche Bank owns most of it, consolidates DWS’s figures in its results and calls it a core business for the bank. DWS’s chairman,

sits on the management board of Deutsche Bank.

Ms. Fixler’s email, reviewed by the Journal, went to Mr. von Rohr and

Deutsche Bank’s global head of communications and sustainability. She wrote at the time that she believed she was being fired by DWS for raising concerns about several issues she had found at the firm, including that DWS overstated its sustainable-investing efforts.

ESG investments are a booming business for asset managers like DWS. Trying to meet demand from investors, some firms have rushed to classify investment strategies as ESG-friendly. U.S. regulators have warned money managers against pitching misleading ESG products.

In August, the Journal reported that DWS overstated how much it used sustainable investing criteria to manage its assets, according to Ms. Fixler and documents. DWS has denied it overstated its ESG capabilities, saying its process is transparent to investors.

Later in August, the Journal reported prosecutors and the Securities and Exchange Commission were investigating DWS’s claims related to its ESG business, citing people familiar with the matter.

PLC—that they had breached the terms of earlier deferred and nonprosecution agreements, respectively. Ericsson said it would continue to cooperate with the department. NatWest said that it was engaged in discussions with the U.S. authorities and that it believed it shouldn’t be prosecuted over its earlier conduct.