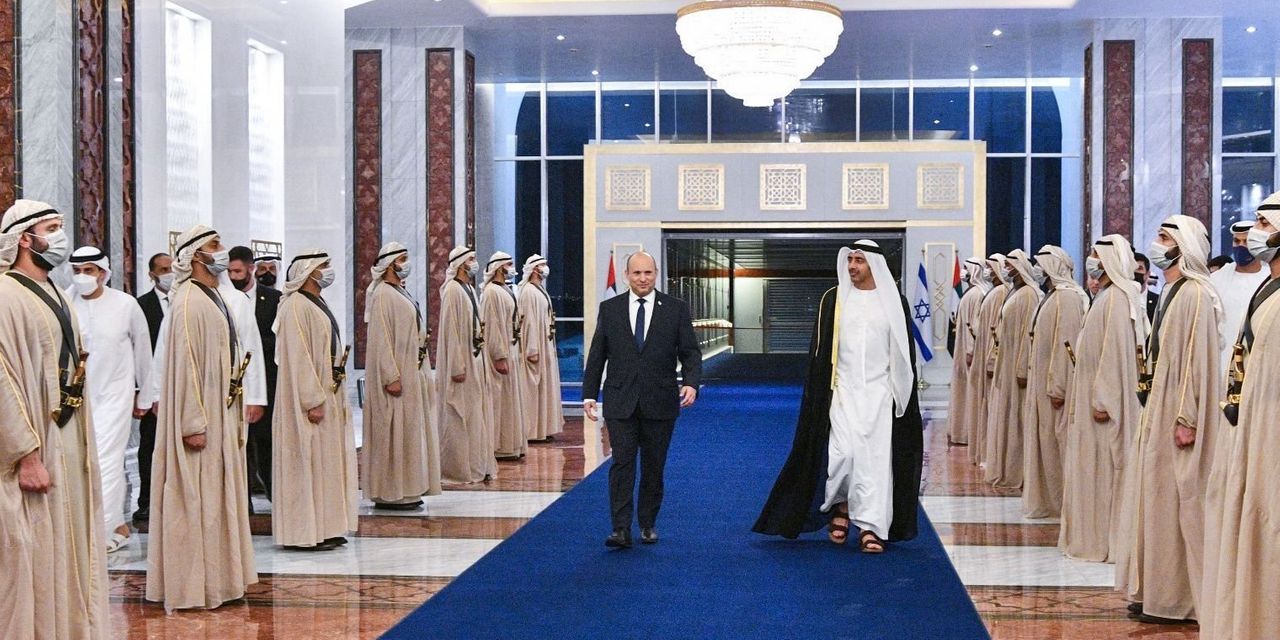 The first-ever official meeting Monday between Israel’s prime minister and the United Arab Emirates’ de facto leader is the latest in a flurry of diplomacy reshaping the geopolitics of the Middle East amid fear that the Iran nuclear talks will collapse and worries over the shrinking U.S. role in the region.

It also marked an opportunity for the two leaders to discuss budding business ties between their countries, which normalized relations late last year after 50 years of no formal diplomatic ties. The deal led to agreements with several other Arab countries called the Abraham Accords, and billions of dollars in new business.

On Monday, Mr. Bennett and Sheikh Mohammed spent more than four hours in talks, both with broader delegations and in a 2½ hour one-on-one meeting at the prince’s palace.

A joint statement called Mr. Bennett’s visit “another milestone in the development of warm relations and a close partnership between the two countries” and said a variety of economic and civic issues were discussed.

The two countries have already increased registered bilateral trade by 10-fold year-over-year in the first 10 months of 2021 to $874.5 million. That sum doesn’t reflect some of the biggest deals struck between Israel and the U.A.E., including the $1 billion sale by Israel’s Delek Drilling of a stake in its Tamar gas field to Emirati wealth fund Mubadala.

a supporter of Islamist political movements that the U.A.E. see as a national-security threat.

Separately, Qatar is brokering talks between Saudi Arabia and Turkey for a once-unimaginable meeting between Crown Prince

and Mr. Erdogan, said people familiar with the efforts, signaling a potential detente in a rift that has divided the region for years. Qatari officials unsuccessfully tried to get the two men together in Doha last week, when they both passed through within a day of each other, and officials are looking for a suitable time and place in the coming weeks, the people said.

Middle East diplomats say they are talking to rivals they have shunned for years amid uncertainty over the Biden administration’s commitment to the region following its abrupt withdrawal from Afghanistan and its foreign-policy pivot toward China. After an alleged Iranian drone attack on two Saudi oil installations in 2019 that was largely left unanswered and a reduced U.S. role in Iraq, regional officials see Washington’s appetite for involvement in the region shrinking.

“There is a question of what the Americans’ policy is in the Middle East and the perceived image is that they want to get the hell out of here, and they say as much,” said Yoel Guzansky, a senior research fellow focused on Persian Gulf politics and security at the Institute for National Security Studies in Tel Aviv.

Gulf and Israeli officials have watched with unease as the U.S., Russia, China and the European Union hold talks in Vienna with Iran to revive the 2015 nuclear deal, which lifted sanctions on Iran in exchange for limits on its nuclear program. There has been little progress over two weeks, and Middle East officials fear the negotiations could collapse and precipitate a regional crisis with Tehran.

“All the players—Israel, the U.A.E.—everyone is jockeying for position,” said Joshua Teitelbaum, professor of Middle Eastern studies at Bar Ilan University outside of Tel Aviv. “There is a new administration with a policy we’re still guessing over and Iran is on the threshold of getting a nuclear weapon, it’s forcing everyone to renew relationships.”

With dialogue renewed across the Middle East, Israel remains at a disadvantage. Despite the Abraham Accords, it has few and mostly unofficial contacts throughout the rest of the Persian Gulf, making it more dependent on the U.A.E. Israel has no formal relations with Saudi Arabia, despite a secret desert meeting last year between Prince Mohammed and then-Prime Minister

The Emiratis see a partnership with Israel, which has increasingly advocated for its right to strike Iranian nuclear targets, as a way to boost their security credentials potentially with advanced Israeli weaponry, observers said. But the Emiratis are also worried that any uncoordinated military action could be the spark for a wider conflict.

“What the Gulf states are trying to do differently in this new phase is to keep their relations with contentious powers closer and try to undercut Iran,” said Sanam Vakil, deputy director of the Middle East North Africa program at Chatham House.

Renewed dialogue is also lending new momentum toward winding down the conflicts that arose after the Arab Spring uprisings. Saudi Arabia is reducing its military footprint in Yemen as the kingdom has all but lost the war there to Houthi rebels aligned with Iran.

legitimacy in hopes of ending almost a decade of brutal fighting. The U.A.E.’s foreign minister met with Mr. Assad last month in Damascus, and Syria may attend the Arab League summit in Algeria in March for the first time since its membership was suspended in 2011.

and invited him to visit the U.A.E.

The hope of the various dialogues, analysts said, isn’t to repair relations with a rival but to restore channels of communication in the event of a breakdown of the nuclear talks.

For Mr. Erdogan and Prince Mohammed, a meeting offers a chance to put behind them problems that have poisoned the relationship between Turkey and Saudi Arabia. Among them: The murder of writer Jamal Khashoggi by a team of Saudi government operatives at the Saudi consulate in Istanbul in 2018. Prince Mohammed wants a promise that Mr. Erdogan won’t ever mention Mr. Khashoggi’s death again and prevail upon Turkish media to stop dredging up the topic, according to Saudi and Qatari officials.

For Mr. Erdogan, the calculus may be more about money than geopolitics. With Turkey gripped by a currency crisis, he has been looking for economic lifelines.

Write to Thomas Grove at thomas.grove@wsj.com, Stephen Kalin at stephen.kalin@wsj.com and Summer Said at summer.said@wsj.com