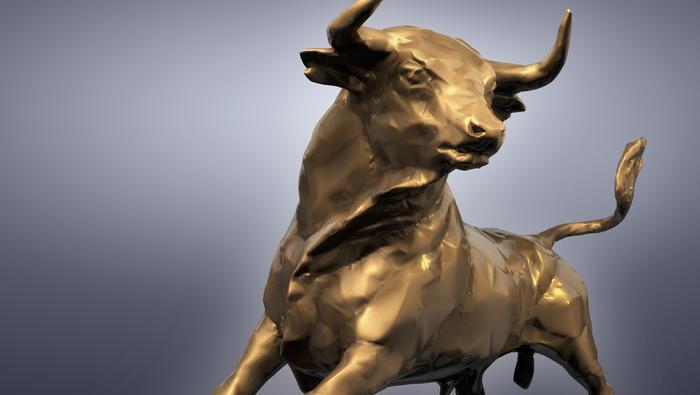 There’s been a change in tonality for Gold so far this week and it pretty much started as soon as Gold price quotes began coming in. A major push was the batch of Chinese data that was released Sunday night, which was underwhelming and was accompanied by an unexpected rate cut out of the PBoC. Coming into this week, the bank was sounding less-dovish so the fact that they felt a need to adjust rates so quickly raised question marks, especially given the timing with another raft of poor data.

With that said, Gold prices were starting to exhibit signs of a possible shift last week. As I had written on Wednesday, a rising wedge formation had formed. Such formations are often approached with the aim of bearish reversals, and despite the strength leading into the formation, prices began to show tendencies of a turn late last week and then that theme was hammered home to begin this week.

Taking a step back to get some context on the matter, and there’s a few observations of note. The first is that bulls failed to re-test the 1832-1842 zone, which is a key area that last provided support-turned-resistance in June as price spent much of the month grinding through that zone. The fact that sellers stepped-in ahead of a re-test highlights bearish anticipation, and this is a factor that helped to play into the turn that we’re seeing now.

But, perhaps more notably, key support sits lower on the chart, around the 1763-1771 area. This was last in-play two weeks ago, helping to cauterize support before buyers launched-higher.

And third – there’s unfilled gap below that zone, running from around 1751, a prior point of price action resistance, down to around 1720.

Gold at this point is fairly tied-in with macro themes around rates, inflation and Central Bank policy. The bounce that showed up in July syncs with a similar risk-on mood that showed in equities (and just after a major zone of support came into play around 1680), with each of those themes being helped along by the thought of a less-hawkish Fed.

On a short-term basis, there’s remaining bearish potential, looking for the sell-off from the rising wedge to continue filling-in. The next ideal spot for support to show would be in that same 1763-1771 zone, at which point price action can illustrate whether there’s deeper bearish potential, perhaps even down towards the gap and maybe even a re-test of the major support zone that came into play in July and helped to bring on the bullish move.

Longer-term, it’s that major zone of support that’s now seen three separate inflections over the past two years that looms large. And bearish runs are going to have to contend with that area until sellers are finally able to take it out to produce fresh multi-year lows. This could be a remaining factor for longer-term approaches, as theoretically-capped upside potential could make bearish swing strategies as less attractive until a more-confirmed area of longer-term resistance comes into play. And to break through a major area of long-term support, that may be what’s needed. Case in point, look at EUR/USD’s struggles to leave the parity level in the rear-view.