EUR/USD Rate Vulnerable to Diverging Policies Between ECB and FOMC

EUR/USD appears to be stuck in a narrow range with both the Federal Reserve and European Central Bank (ECB) rate decision on tap for later this week, but the Governing Council’s wait-and-see approach for monetary policy may drag on the Euro as President Christine Lagarde and Co. remain in no rush to implement higher interest rates.

EUR/USD Rate Vulnerable to Diverging Policies Between ECB and FOMC

EUR/USD tracks sideways after defending the November low (1.1186) during the previous week, and it remains to be seen if the fresh projections coming out of the Fed will sway the broader outlook for the exchange rate as the central bank carries out its exit strategy.

As a result, the update to the Summary of Economic Projections (SEP) may show a steeper path for the Fed fund rate as Chairman Jerome Powell and Co. “generally judged that the Committee’s criterion of substantial further progress had clearly been more than met with respect to inflation,” and the US Dollar may continue to outperform its European counterpart in 2022 if the FOMC shows a greater willingness to deliver a rate hike sooner rather than later.

Meanwhile, the ECB may merely attempt to buy time at its last meeting for the year amid the renewed restrictions in response to the Omicron variant, and the Governing Council may continue to brace for a transitory rise in price growth as officials “foresee inflation rising further in the near term, but then declining in the course of next year.”

In turn, the ECB may continue to support the Euro Area in 2022 as President Lagarde and Co. “foresee inflation in the medium term remaining below our two per cent target,” the Euro may face a more bearish fate over the coming months as long as the Governing Council stays on track to carry out “a moderately lower pace of net asset purchases under the pandemic emergency purchase programme (PEPP) than in the second and third quarters of this year.”

The deviating paths between the ECB and FOMC may keep EUR/USD within a bearish trend as it trades to fresh yearly lows in the second half of 2021, but the tilt in retail sentiment looks poised to persist even as the exchange rate tracks sideways after defending the November low (1.1186). 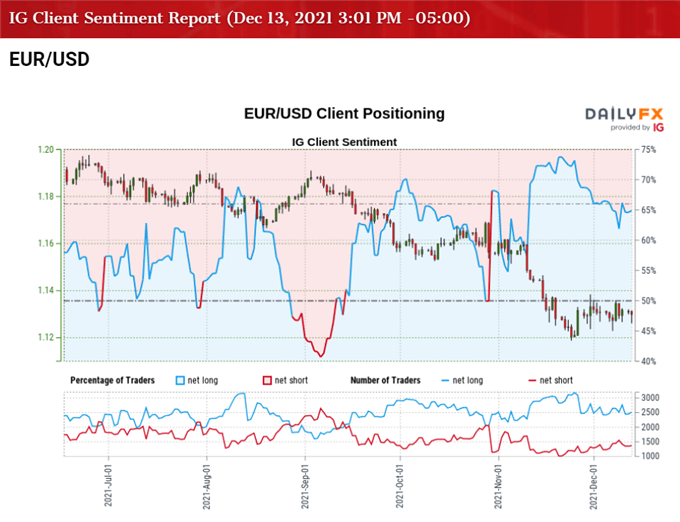 The IG Client Sentiment report shows 64.05% of traders are currently net-long EUR/USD, with the ratio of traders long to short standing at 1.78 to 1.

With that said, EUR/USD may continue to consolidate within the monthly range amid the central bank rate decisions on tap for later this week, but the diverging paths between the ECB and FOMC may keep the exchange rate within a bearish trend as it trades to fresh yearly lows in the second half of 2021.