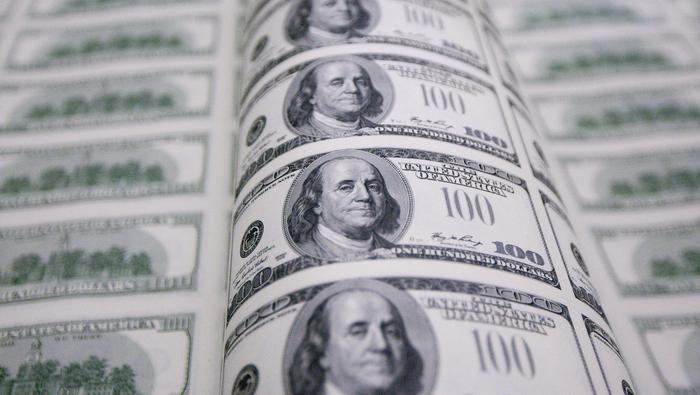 The US Dollar’s (via the DXY Index) rebound in recent days has been catalyzed by familiar forces: US Treasury yields turning higher as near-term Fed rate hike odds increase. Falling as low as 10% after the July Fed meeting, rates markets are now pricing in a 50% chance of a 75-bps rate hike in September following hawkish commentary by two notable doves on the FOMC, Minneapolis Fed President Neel Kashkari and San Francisco Fed President Mary Daly.

Alongside the continued rebound in risk appetite as evidenced by moves in US equity markets and cryptocurrencies, plus a diminished demand for safe havens after US Speaker of the House Nancy Pelosi’s visit to Taiwan, the Japanese Yen has sold off quickly over the past few days. The fundamental catalyst – no Chinese military response to the visit – arrived at a technically opportune time for USD/JPY rates, which had recently returned to former resistance turned support. 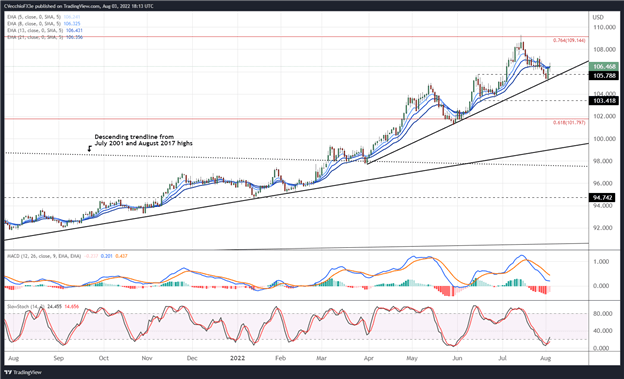 As expected, a setback occurred in the DXY Index around the July Fed meeting, seeing the dollar gauge drop below its daily 21-EMA (one-month moving average) and back to the rising trendline from the late-March and late-May swing lows. The DXY Index has rebounded quickly, however, with a bullish outside engulfing bar/key reversal forming yesterday, suggesting more upside potential in the near-term.

While momentum has flattened out – daily MACD is still declining albeit above its signal line while daily Slow Stochastics are just exiting oversold territory – the dollar gauge is carving out a daily doji candle today, pinned around its daily 5-, 8-, 13-, and 21-EMAs (which are in neither bearish nor bullish sequential order). The path forward is rather simple: the DXY Index can continue its rebound if near-term Fed rate hike odds and US Treasury yields continue to decline; or a deeper setback may transpire yet, should Fed rate hike odds and US Treasury yields fall back. 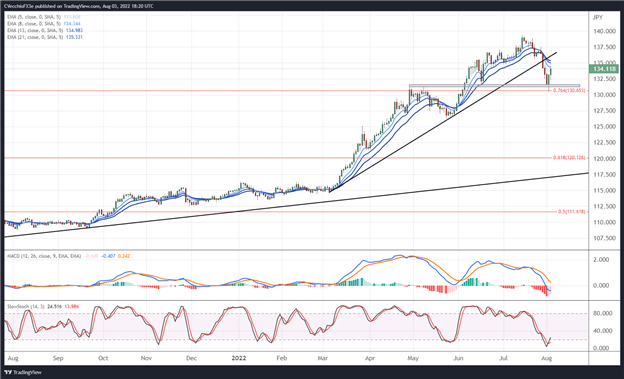 After losing the uptrend from the early-March and late-May swing lows, USD/JPY rates quickly sold off into the area around the April and May highs, former resistance that turned to support with the mid-June sell-off (131.25/49). A rally in US equity markets and higher US Treasury yields are proving to be a tailwind, although weakness in energy prices may be preventing a more considerable rebound.

The fact of the matter is with conflicting fundamental factors, USD/JPY rates are in a bit of a technical ‘no man’s land,’ having yet to retake the multi-month uptrend that defined the rally for much of 2022. Daily MACD is still declining through its signal line while daily Slow Stochastics are exiting oversold territory, but the pair remains below its daily 5-, 8-, 13-, and 21-EMA envelope, which remains in bearish sequential order. More price development is needed before a directional bias can be discerned. 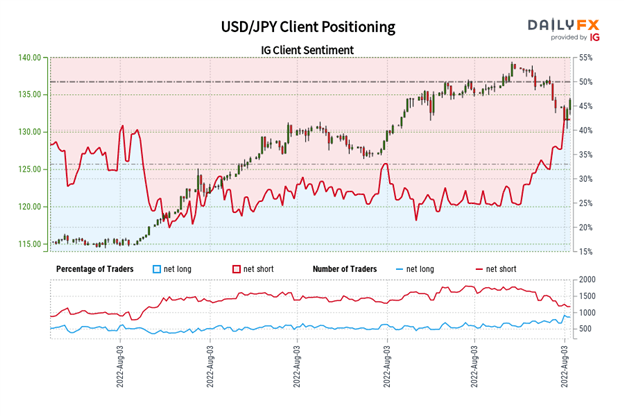 We typically take a contrarian view to crowd sentiment, and the fact traders are net-short suggests USD/JPY prices may continue to rise.

Positioning is more net-short than yesterday but less net-short from last week. The combination of current sentiment and recent changes gives us a further mixed USD/JPY trading bias.

Falling Wedge but Can Bulls Force a Reversal?

Introducing Coinbase Security Prompt — a safer and easier way of signing into Coinbase | by Coinbase | Jul, 2022

Falling Wedge but Can Bulls Force a Reversal?