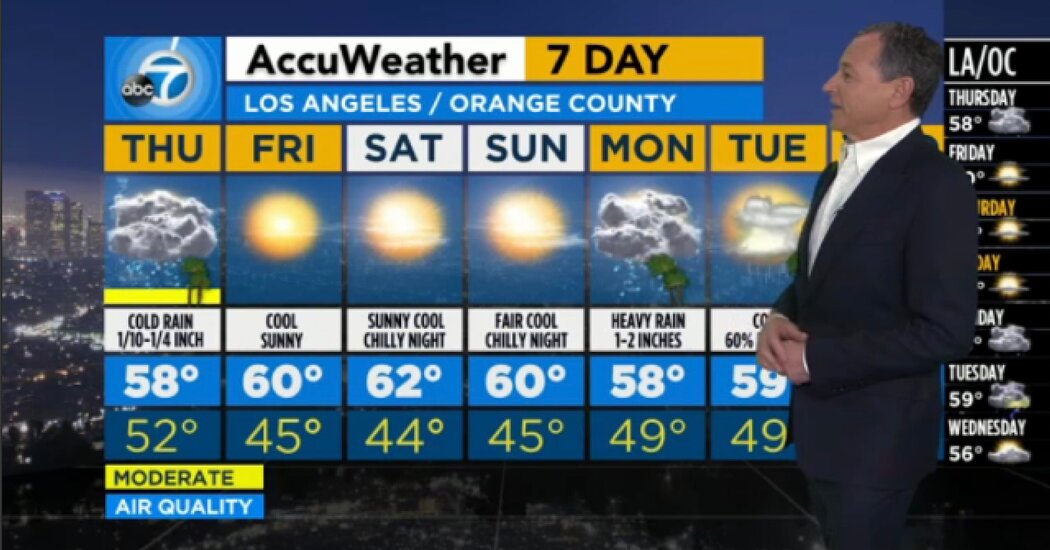 Long before he became Disney’s celebrated supreme leader, Robert A. Iger was a humble weatherman. He started his career in 1973 at a cable station in Ithaca, N.Y., where his duties involved standing in front of a map and doing that awkward talking-into-space thing while reciting temperatures.

On Thursday, he went out the way he came in.

“There is light rain falling across the Southland this morning, expected to get just a little bit heavier as the jay — day — progresses,” Mr. Iger said on an early-morning KABC newscast in Los Angeles, standing in unannounced for the station’s usual weather guru, Leslie Lopez. “However, this is just a prelude to a big storm.”

Mr. Iger, who will retire on Dec. 31, is typically movie-star smooth. But he was a little stiff as he stood sideways and started the report. Jitters? Harder than it looks?

Then he relaxed, even tossing in a few charismatic ad-libs.

“Very nippy on Saturday morning by the way — 62 degrees in the Los Angeles area,” he said. “The beaches, near where I live? Ooh, 46 degrees on Saturday morning. That’s when I bike ride. I think I’m going to have to watch out for some early-morning frost!”

Ms. Lopez, who was standing just off screen, and Leslie Sykes, KABC’s longtime morning news anchor, rushed over to congratulate him at the end of the segment. “You did great!” they both shouted. They continued to gush until Scott Reiff, a reporter, cut in from a helicopter.

“All right, I think we have to go to traffic here,” Mr. Reiff said. KABC is owned by Disney.

Mr. Iger, 70, was 23 when he last did the weather. He was something of a flop, lasting only a year. But the experience was transformative. As he wrote in “The Ride of a Lifetime,” his 2019 business memoir, “That year of toiling in obscurity (and performing with mediocrity) convinced me to abandon the dream I’d had since I was 15 years old — to be a network news anchorman.”

He has joked in interviews over the years that giving the residents of Ithaca their daily weather report left him with a useful skill. “It taught me how to give people really bad news,” he said in 2019 while promoting his book. “It’s Memorial Day. It’s going to rain all weekend.”