Crude oil prices are attempting a tepid recovery from four-month lows after the OPEC+ group of major producers agreed to proceed with restoring output levels having ended a regime of coordinated production caps. The move aims to add a further 400k barrels/day in January (although members have struggled to meet quota).

A selloff initially followed, suggesting traders were somewhat surprised by the cartel-led consortium, having perhaps expected a pause given prices’ breakneck plunge recently. Momentum quickly fizzled however, with oil recovering all of the ground lost intraday.

That may owe to a change in rhetoric accompanying the decision to stay the course. Officials signaling that an about-face pivot is possible in the near term if their concerns about the impact of the newly-identified Omicron variant of Covid-19 on demand materialize.

From here, the spotlight turns to November’s US jobs report. An increase of 550k in nonfarm payrolls is expected, which would mark relatively steady growth after October’s 531k rise. The unemployment rate is seen ticking lower from 4.6 to 4.5 percent.

US economic news-flow has tended to outperform relative to baseline forecasts recently, hinting that analysts’ growth models are overly pessimistic. Leading PMI survey data warns that the pace of job creation has slowed substantially however as labor shortages derail filling a sea of vacancies.

A soggy payrolls rise coupled with another pickup in wage inflation reflecting these dynamics may warn of mounting “stagflationary” forces on the horizon. Omicron’s spread threatens to compound such risks if it results in another broad wave of restrictions fracturing supply chains and stifling economic activity.

Worries about the policy uncertainty inherent to such a scenario – where rising prices demand tightening but weak growth begs for accommodation – may broadly sour risk appetite. This could pull crude oil lower alongside other sentiment-sensitive assets.

The WTI contract is cautiously probing above inflection point resistance at 66.68. A break higher confirmed on a daily closing basis sees subsequent upside barriers at the $70/bbl figure and 73.14. Immediate support is anchored at 61.11, with a break below that setting the stage for a test below the $60/bbl handle to challenge the swing low at 57.25. 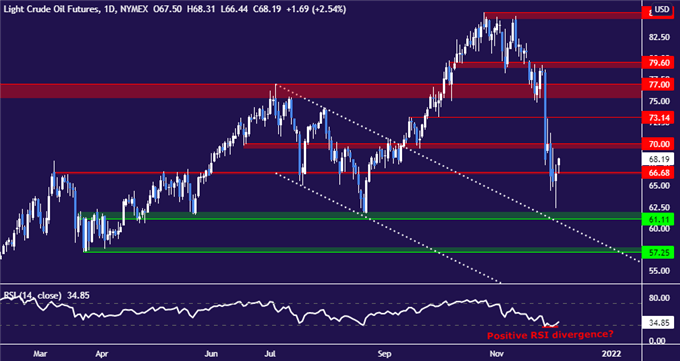