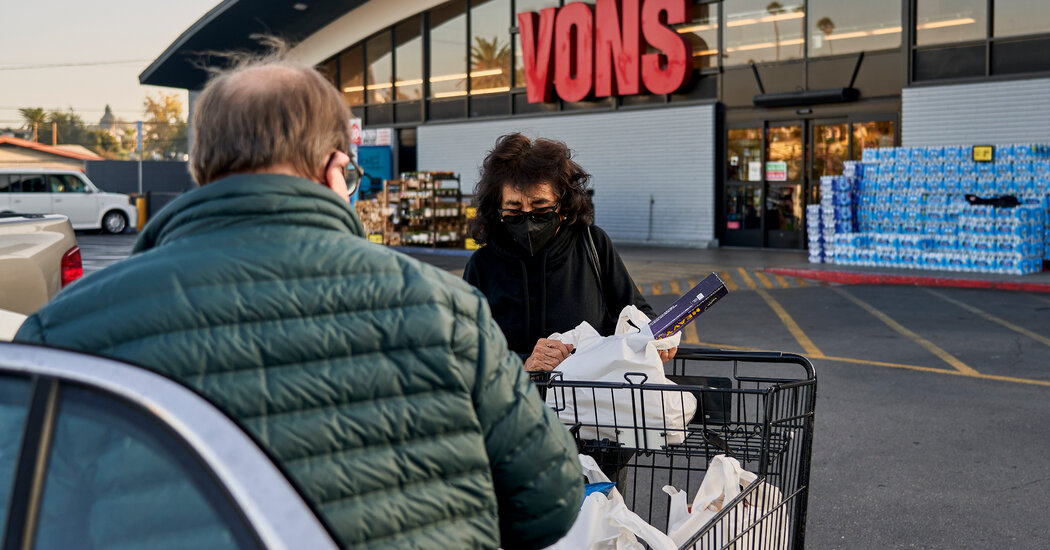 The rising costs spell trouble for officials at the Federal Reserve and the White House, who are trying to calibrate policy at a moment when the labor market has yet to completely heal from the pandemic but inflation is proving more persistent than policymakers had expected.

The Consumer Price Index climbed by 6.8 percent in the year through November, the data showed, the fastest pace since 1982. After stripping out food and fuel, which can move around a lot from month to month, inflation climbed by 4.9 percent. That was the quickest annual reading since 1991.

Monthly price increases — the change between October and November, rather than over the past year — did moderate somewhat, but still rose at an unusually rapid pace.

The question is what happens next. Fed officials have become increasingly concerned about price increases — both because the uptick has lasted longer than expected and because it shows signs of broadening to areas less affected by the pandemic, suggesting it could become entrenched.

Earlier this year, prices increases were concentrated in goods. Used cars and couches were in demand as the pandemic changed people’s lifestyles, but factories around the world struggled to keep up with the surge in buying, in part because shutdowns tied to the virus upended production. Shipping routes and ports also became clogged as demand followed an atypical pattern, with too many U.S.-bound goods trying to leave Asia in particular.

Those disruptions were expected to be temporary. Instead, they have lasted for months, as demand for goods remains strong and the virus continues to disrupt manufacturing and transportation.

As pandemic quirks persist, inflationary pressures are also broadening to areas that are not directly impacted by the virus. That includes rental prices, which have surged after an initial slackening during the pandemic and are helping to push up overall price gains. It’s a worrying development for the Fed as it considers its next policy steps.

“Generally, the higher prices we’re seeing are related to the supply-and-demand imbalances that can be traced directly back to the pandemic and the reopening of the economy, but it’s also the case that price increases have spread much more broadly in the recent few months,” Jerome H. Powell, the Fed chair, said during congressional testimony late last month. “I think the risk of higher inflation has increased.”

Fed officials are closely watching what happens with wages — and with consumer inflation expectations — as they try to gauge when and how much inflation will fade. But they are also starting to acknowledge that they might have to react to rising prices.

Mr. Powell signaled last week that the Fed, which laid out a plan to begin cutting back on economic support last month, will discuss speeding up that process at its Dec. 14-15 meeting. Economists expect central bankers to announce a plan to slow down their monthly bond purchases fast enough so that the program ends several months earlier, putting Fed officials in a position to raise their benchmark interest rate, their more traditional and more powerful tool.

Friday’s data will keep policymakers on track to accelerate their plans to taper off bond purchases, said Alan Detmeister, a senior economist at UBS and former chief of the wages and prices division at the Fed Board in Washington.

“This is still an enormous — a very, very strong — number,” Mr. Detmeister said, explaining that while he expects inflation to moderate, it may take until the middle of next year for that to show up clearly in the year-over-year data. “It seems pretty clear that they’re going to speed up the taper,” he added.

Moving to the next step — raising rates — would make debt of all kinds, from mortgages to car and business loans, more expensive. That would likely slow spending and hiring, cooling off demand and weighing down buoyant housing costs. The combination could help to put a lid on price gains.

But it could also leave the country with a less competitive labor market. That could be bad if the millions of people who remain out of the labor market compared to before the pandemic — many of them because of child-care issues and other virus-tied concerns — decide to embark on a job hunt.

Even so, the Fed is wary of letting inflation rocket out of control. In the 1960s, the central bank failed to take sufficiently decisive action to tamp down rising prices. Inflation leapt out of control, rising to double-digit levels during the 1970s, and Paul Volcker, then the Fed chair, pushed interest rates up sharply to get things under control in the early 1980s.

The hit to demand caused a painful recession before it brought price gains to heel. The mistake, and its aftermath, has haunted central bankers’s nightmares ever since.

Now, Fed officials are watching wages and consumer expectations to try to gauge whether prices are on the cusp of becoming more problematic.

As housing and other day-to-day costs rise, workers may begin to ask for raises to help offset the financial blow. Climbing wages can feed into inflation as companies pass rising labor costs on to consumers, and as bigger paychecks help households to keep spending, sustaining consumer demand.

Data show that pay is climbing briskly. Employers are competing for laborers at a time when job openings far exceed the number of people actively looking for jobs, and they are lifting pay to attract and retain workers. The Employment Cost Index, a measure the Fed watches closely, picked up notably in the three-month period that ended in September.

Wages are rising especially rapidly for low earners, though they have not kept up with the acceleration in prices for most workers in recent months. Still, continued government benefits — including an expanded child tax credit — may mean that families are better positioned to afford climbing expenses.

“We are actually seeing that the price increases that we’ve put through as a result of covering the costs that we’re getting from input product and freight is being absorbed by the customer,” Bruce K. Thorn, chief executive officer at Big Lots, said on a Dec. 3 earnings call, later adding that, “we’re not seeing that resistance.”

Democrats have begun to blast big companies for taking advantage of the moment.

“Now, while working families are just starting to get back on their feet, mega corporations would rather pass higher costs onto consumers than cut into their profits,” Sherrod Brown, a Democrat from Ohio, said a recent hearing.

But Republicans have put the blame on Mr. Biden and Democrats, a development that threatens to imperil the president’s bigger agenda. Centrist Democrats have begun questioning the wisdom of pouring more money into the economy at a time when demand and prices are hot.

“The unknown we’re facing today is much greater than the need that people believe in this aspirational bill that we’re looking at and we’ve got to make sure we get this right,” Senator Joe Manchin III, Democrat from West Virginia, said earlier this week.