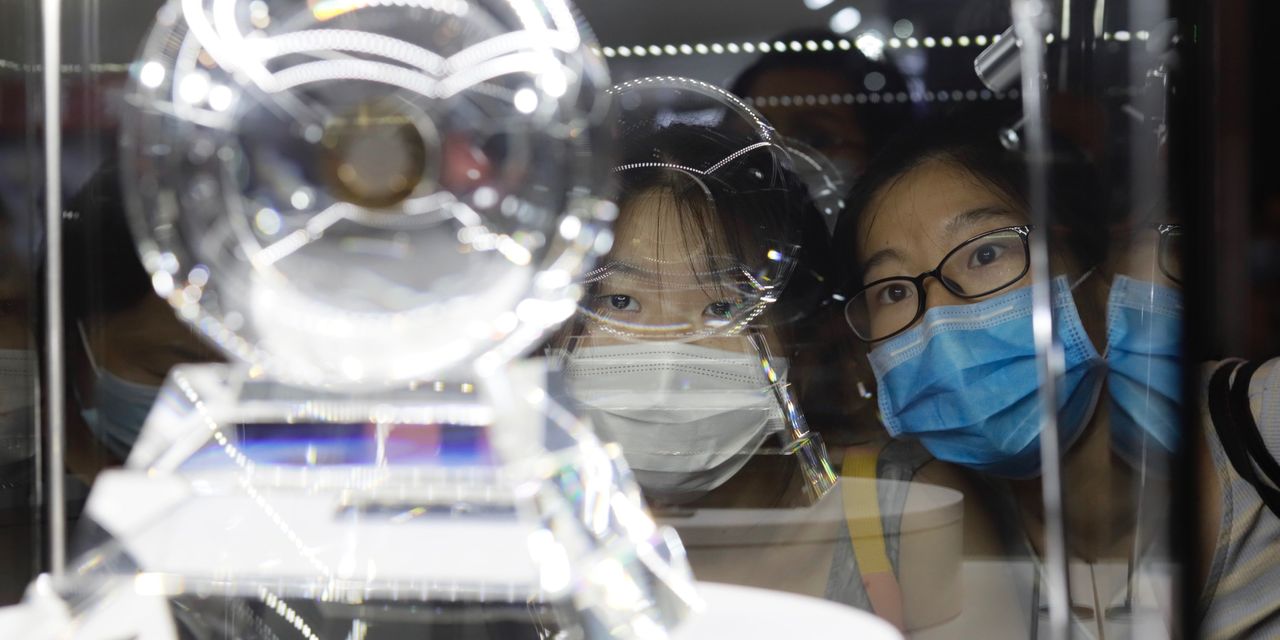 HONG KONG—Nestled in 3.82 pounds of moon soil is what China hopes could be the answer to fueling its future.

Chinese nuclear scientists are studying samples carried back by China’s Chang’e 5 late last year in the first mission to return with lunar material since the Soviet Union’s in 1976. One of those under the microscope at the Beijing Research Institute of Uranium Geology is a 50-milligram rock—approximately the size of a lentil—believed to contain an isotope called helium-3.

The isotope, a variant of the atom helium with a different number of neutrons, is thought by scientists to have the potential to one day provide safer nuclear energy in a fusion reactor, as it isn’t radioactive. Rare on Earth, helium-3 is thought to be abundant on the moon.

While researchers in the U.S. and other nations have studied the isotope, China’s renewed pursuit is part of a decadeslong plan to establish itself as a leading space power, mirroring the country’s rising economic and strategic influence on Earth. Since being shut out of working with the U.S. space agency by law a decade ago, the country has invested heavily in its own program. China is still playing catch-up technologically but is seeking to gain an edge through its moon missions.

China’s counterpart to the National Aeronautics and Space Administration’s Artemis program—the U.S.-led plan to return humans to the moon around 2025—is growing in ambition. From being the first nation to land on the far side of the moon in 2019, to maneuvering a rover across Mars and constructing its own space station this year, China’s rapid moves have kicked off a new space race with the U.S.

In October, Chinese scientists published findings from the Chang’e 5 mission in the journals Science and Nature. The samples of volcanic rock they analyzed are the youngest lunar samples found, dating back two billion years. Their work shows how lunar composition and water content changed over time, offering new insights into the thermal and chemical evolution of the moon.

China ultimately envisions a future where it commands more power in space: It will have powerful rockets ferrying its spacecraft, and its people will pioneer explorations around planets. Those goals are laid out in a 2016 white paper that outlines the country’s space ambitions, akin to the U.S.’s National Space Policy, and China has since been steadily achieving its milestones.

The push corresponds with increasing Chinese nationalism under leader

“You are the representatives of those who are striving and climbing in China’s space industry in the new era,” Mr. Xi said in a June call with astronauts spending time at the country’s first space station.

Beijing is also establishing more global alliances in space projects. In October, the Chinese Academy of Sciences announced an agreement with its French counterpart to study the Chang’e 5 lunar samples. In March, China announced a tie-up with Russia’s space agency to develop a joint moon base in the coming decade.

“China is now building the Silk Road to space,” said James Head, a professor of geological sciences at Brown University who has lectured at universities across China in the past few years. Space missions take time, investment and long-term planning, he said, and Beijing is investing strategically.

While China doesn’t officially publish how much it spends on its space program, data compiled by Namrata Goswami, a co-author of the book “Scramble for the Skies,” indicates that the country spends $8 billion to $11 billion on just its civilian space program. There is no data available on its military spending in space.

Bill Nelson, the head of NASA, told a congressional hearing in May that approval of its proposed $24.8 billion budget for 2022 would better position the U.S. to compete with China by first returning humans to the moon and eventually landing them on Mars.

Seeing the impact companies like SpaceX had in the U.S., China opened up its space industry in 2014 and now has dozens of private companies.

The rivalry isn’t like the bitter Cold War competition between the U.S. and the Soviet Union, said David Burbach, professor of national security affairs at the U.S. Naval War College.

“I don’t think either country believes that whoever lands on the Moon next is nearly as meaningful to their foreign policy as is their overall economic power and diplomatic influence,” said Mr. Burbach, who was speaking in a personal capacity. Still, China’s space program did strengthen support in the U.S. for NASA’s Artemis program, created in 2017 by then-President

Three taikonauts—as Chinese astronauts are known—are spending six months in its space station, which is scheduled for completion by the end of next year. Beijing is planning a series of unmanned missions, including sending robots to the moon, over the next few years as it builds its base with Russia. To prepare for humans spending months on the moon, a group of Chinese volunteers lived for a year in a self-contained lab in Beijing, growing their own food and recycling water.

“China’s moon program is the most important and central component of its entire space strategy,” Ms. Goswami said. “All of these milestones help the country come closer to fulfilling Mr. Xi’s space dream.”

Chinese officials tasked with nuclear fusion projects say it could be decades before efforts come to fruition. The Beijing institute studying helium-3, which is backed by the state-owned China National Nuclear Corporation, discussed the efforts in an August state-media interview and didn’t reply to a request for further comment.

The theory that the moon might have abundant reserves of helium-3 goes back several decades. In 1986, scientists at the University of Wisconsin estimated that lunar soil could contain a million tons of the isotope, also known as He3.

A byproduct of the sun’s intense heat, it is carried through the solar system by solar winds. Since the moon doesn’t have the magnetic field Earth does, a veneer of the colorless, inert atom is believed to be embedded on the moon’s regolith—the blanket of loose deposits that cover its surface.

China’s renewed efforts to study helium-3 are at a very early stage, as there still isn’t a way for humans to easily map, extract or process it.

“There’s no element of the operation that’s been figured out yet,” said Joseph Michalski, deputy director of the University of Hong Kong’s Laboratory for Space Research, who isn’t involved in the Beijing study. “It’s like if someone offered you a suitcase stuffed with $5 million, but it’ll cost $10 million to pick it up.”

In the future, there could be machines that vacuum up the top layer of the moon’s surface, which could then be used to address Earth’s energy needs or to power moon bases for future missions, Mr. Michalski said. And even after helium-3 can be contained,  another hurdle will be generating enough heat in a short amount of time to create the appropriate reaction.

China and the U.S. are among dozens of countries collaborating on the International Thermonuclear Experimental Reactor, a $22 billion project being built in France that is intended to demonstrate the feasibility of nuclear fusion by maintaining the reaction for longer periods. Nuclear fusion has long been a holy grail in the energy world. No one has been able to produce more energy than it takes to create a fusion reaction, despite decades of research. China has also made progress at its own Experimental Advanced Superconducting Tokamak reactor in the eastern city of Hefei.

“The research is not only of great value for the potential exploitation of such nuclear energy resources on the moon in the future,” Li Ziying, the head of the Beijing institute, told state-owned China Central Television in August, referring to the helium-3 study. It is also of “great significance for the scientific study of the moon itself and its relationship with the Earth.”

Write to Natasha Khan at natasha.khan@wsj.com