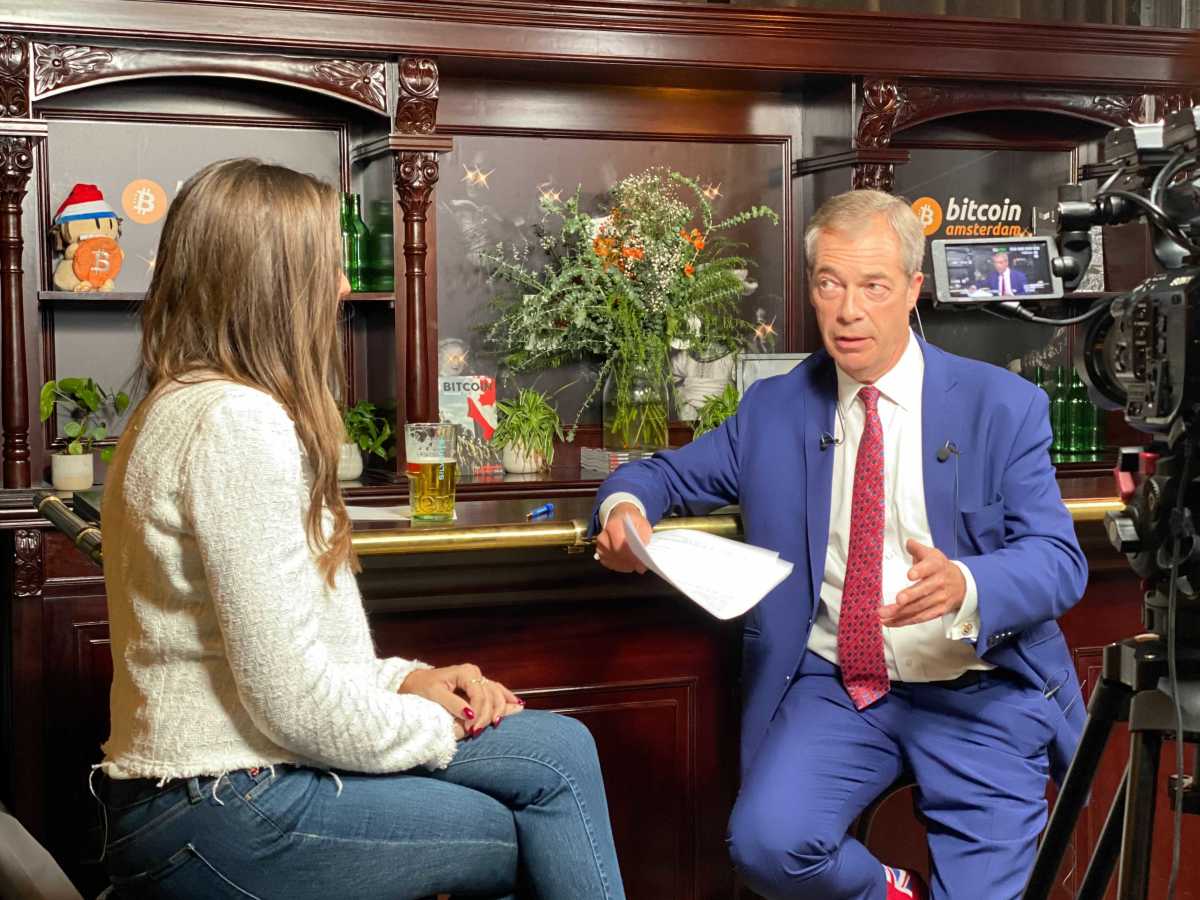 Any new idea automatically faces the opposition of the establishment, said former Member of the European Parliament, Nigel Farage, on a panel at Bitcoin Amsterdam on Thursday.

That argument served as the introduction to Farage’s point throughout the conversation, as he drew parallels between Bitcoin and his experience pushing the then-unpopular idea of Brexit, the exit of the U.K. from the European Union.

​​“I led a political insurgency, I took on the establishment,” Farage recounted. “What I think is happening with Bitcoin is we’re seeing a similar type of insurgency, an economic insurgency that is being driven and led by people who are worried about the sheer size and scale of big government.”

The subject was ignited by fellow panelist and “What Bitcoin Did” podcast host Peter McCormack’s initial question. “What are you doing at a Bitcoin conference?”

Farage concluded that because of the links between his past experience and the Bitcoin movement today, it was “a perfect and natural place to be.”

The politician expanded on his argument, detailing more of his views of the establishment and why it can be difficult to challenge it. Those who are part of and maintain the establishment, he argued, “own and set the status quo, they are very comfortable… and they don’t want anything to come along and disrupt.”

“And I think Bitcoin is seeing that.”

The parallels between Farage’s past leading the Brexit movement and the present reality of the burgeoning technology kept being expanded upon as he began to discuss liberties and freedom. Farage commented on the EU Commission and its relationship with lawmakers, claiming that the fact that bureaucrats are the ones steering the ship doesn’t paint a pretty picture for the EU in his mind.

“I believe in freedom, I believe in liberty, and I believe the nation-state represents the best way to do it at the moment,” Farage said. “I’m absolutely proud of campaigning for Brexit, achieving Brexit, and I believe it is the first brick out of the globalist EU world.”

Similarly, Farage believes that bitcoin can help individuals take back control of their finances and ultimately their lives.

Another reason Farage believes in Bitcoin is because “the technology has been proved to work, and it’s getting better.”

In order for Bitcoin to reach its full potential, Farage argued, citizens should encourage lawmakers to properly understand the technology and its implications so they can craft appropriate legislation.

“If we work cleverly, with lawmakers…there’s a good chance in America, the U.K. and perhaps South America too, that we can actually get a sensible level of regulation.”

The challenge, Farage explained, keeps being education as he recounted when he was young and saw lawmakers voting on pieces of legislation on subjects they weren’t well informed about.

“The level of knowledge of those who will be regulating [Bitcoin] is very, very low. Lawmakers need some real education, and that’s not an easy thing to do,” he said.

The lack of proper understanding is probably what leads so many world leaders to consider CBDCs, which he said is one of his main fears. “[They] will take away our economic freedom.”

But don’t feel discouraged, Farage said, referring to Mahatma Gandhi’s famous saying that “first they laugh at you, then they fight you, and then you win.”

“You know you’re winning when they really start getting nasty,” he said.

Disclaimer: Bitcoin Magazine is owned and operated by BTC Inc, the organizer of Bitcoin Amsterdam.