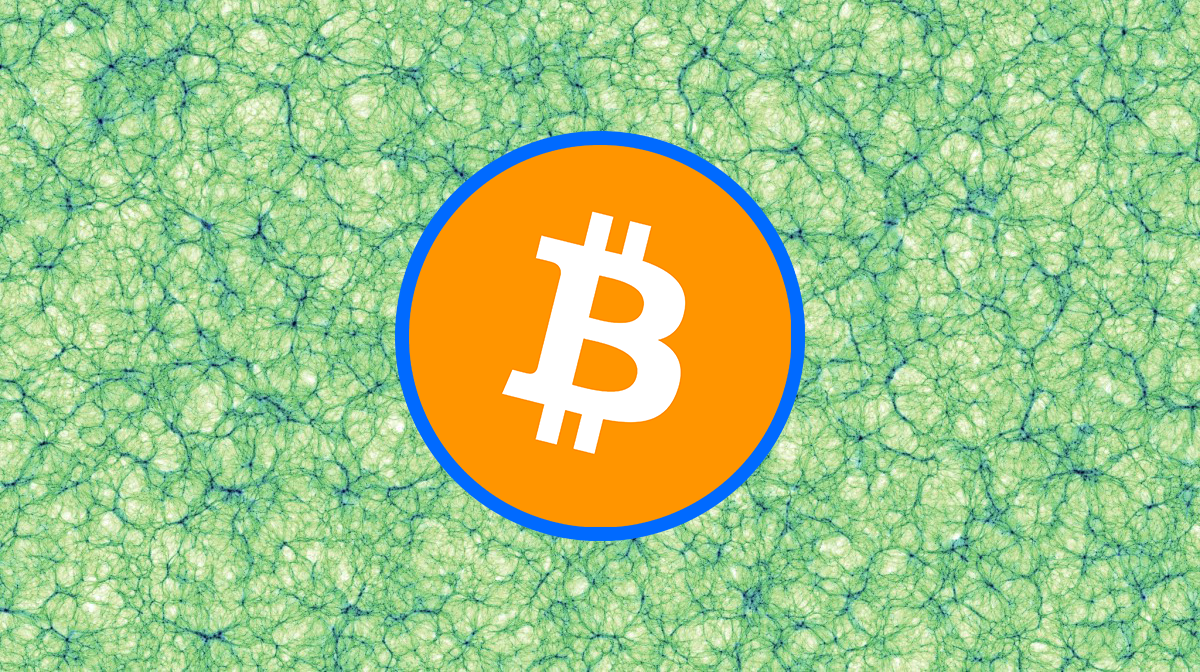 Just as one cannot weigh light or sound, neither can one weigh Bitcoin. While there are several common material components to Bitcoin such as mining machines, hardware wallets, seed plates, and nodes, much of what Bitcoin is, is immaterial.

In physics, matter can be defined as anything that has mass and takes up space by having volume. Matter includes everything that is made of atoms or subatomic particles that act as if they have mass and volume. A photon is an elementary particle without mass, which is why it always travels at the speed of light in a vacuum. A photon is not considered matter. Matter does not include other energy phenomena such as light or sound.

Bitcoin is energy stored up. It is also an immaterial record of energy transferred, as well as a right to send energy that is immune to governance. Bitcoin is also the ability to send energy at varying rates of power. Material devices are required to create and use Bitcoin, but the fundamental difference between creating Bitcoin and other assets is that Bitcoin turns matter and energy into measurable yet immaterial energy. This unforgeable energy conversion, along with Bitcoin’s terminal supply cap, programmed supply issuance (the course of which is stayed by the ingenious hashrate difficulty adjustment) are part of what makes it different from, and superior to all fiat monetary systems. Bitcoin as sound energy is distributed and can be stored anywhere in the universe signal can be sent or received.

There are various phases or states of matter. The classical and familiar phases of matter are solid, liquid, and gas. Other possible states include plasma, quark–gluon plasma, Bose–Einstein condensates, and fermionic condensates. So what is the predominant kind of matter in our universe?

Dark matter is hypothesized to account for eighty five percent of our universe’s matter. It is thought to account for about a quarter of the universe’s matter/energy density. Dark matter, like many phenomena in physics, cannot be seen. Consider it to be one of many phenomena that plays on scales much bigger or smaller than, or orthogonal to the relatively narrow scope human genes evolved to promote themselves within.

Similar to dark matter, Bitcoin’s effects on people and their economies are not well understood, even though most who seriously consider the subject would agree that Bitcoin greatly affects individuals and will play an ever-increasing role in the world economy and Earth’s population altogether through providing property to those that have none. Much in the way we haven’t evolved specifically to do good science or investigate any objective reality, human’s haven’t evolved with Bitcoin, or anything that offers a guarantee of ownership as strong as Bitcoin’s. That is to say that although Bitcoin can be represented materially or through a matter/immaterial combination of screen and light, and although Bitcoin is created and the network is protected through physical processes, what Bitcoin offers us can be difficult to imagine, and many of its effects will likely have to be experienced before they can be discovered.

That is to say, Bitcoin’s effects on human psychology and economic affairs are similar to that of dark matter’s in that the full definitions of both have yet to be discovered.

Dark matter does not absorb, reflect, or emit electromagnetic radiation. Bitcoin’s supply issuance is largely unresponsive to human demand. Although human capital allocation decisions in aggregate decide the hash rate at which Bitcoin is mined, and conscious decisions again determine to which addresses Bitcoin is allotted, Bitcoin supply issuance is predetermined, which is part of what makes its economic effects at once mysterious and predictable.

Matter that doesn’t interact with the electromagnetic field is extremely difficult to detect. In fact, dark matter’s existence is hypothesized largely through inference and deduction. Certain gravitational and other astrophysical anomalies do not make sense without the inclusion of dark matter. For example, galaxies as we understand them, their calculations, their shape, and their movements, would fly apart if one didn’t account for vast amounts of unseen matter.

Bitcoin is the dark horse. Society’s foundations were built on leased and debased ground. Without a sound form of ownership, society’s incentive to collaborate and accumulate capital withers, and progress halts. Bitcoin offers ownership at a time when governments are stripping away rights at an unprecedented rate. Bitcoin is growing sound economies at an increased rate because it is permissionless, granting users an unprecedented right to save, spend, and receive monetary energy. In retrospect, the separation of money and state will seem obvious. Bitcoin is not a monetary innovation, it is the realized invention of money itself.

Without Bitcoin, our global proof-of-stake economies would regress into massive government power-play programs that strip citizens of property and asset ownership. Bitcoin will progress society on a stronger foundation than governments can, by providing sound property, money, and energy ownership to everyone. The traditional economic models are not only broken, but most popular theories have not priced Bitcoin in on any scale.

The ΛCDM (Λ [Greek sign for Lambda] Cold Dark Matter), is a model definition of the Big Bang cosmological theory. In the ΛCDM model definition, the universe is made of three major components. There is a cosmological constant, denoted by Λ (Lambda, a symbol associated with dark energy in physics), the energy density of space, or vacuum energy, from Einstein’s field equations of general relativity. The second component is the hypothesized cold dark matter (CDM). The third major component is ordinary matter.

As discussed previously, Bitcoin is the simplest explanation for the way money is. In retrospect, it will be obvious to the majority that money by mandate was a foolish endeavor, serving those with the greatest stake rather than providing everyone a sound money based on proof of work, outside of state capture or issuance. Bitcoin will become the financial constant of our planet. The other constants are the resources used to mine Bitcoin and protect its network, and time.

The ΛCDM is often referred to as the Standard Model of Big Bang cosmology because it is the simplest explanation that accounts for the following properties.

1) It posits the existence of a Cosmic Microwave Background. The Cosmic Microwave Background is electromagnetic radiation that is a remnant from the early stage of the universe, known as relic radiation. It is the oldest electromagnetic radiation in the universe and is a faint filler of all space. It cannot be detected with a regular telescope. However, when looking through a sensitive radio telescope, the space between any celestial objects is not black, but filled with a faint, near isotropic glow, unassociated with any ordinary matter.

2) It accounts for the accelerating expansion of the universe, which can be observed in the light of supernovae and distant galaxies.

3) It gives a good account of the large scale structure in the distribution of galaxies.

4) It accounts for the abundances of hydrogen, helium, and lithium in the universe.

While there is no direct correlation between ΛCDM and Bitcoin, it may be instructive to view properties of Bitcoin through this lens, as Bitcoin will one day become a monetary standard, and the slow and steady economic shift to its omnipresence will be viewed as a humanity-altering invention.

Dark matter is thought to be completely uniform across space. Though dark matter has never been observed, it is thought to just barely interact with ordinary matter and only through gravity and weak force, therefore it is collisionless. It may be composed of yet undiscovered subatomic particles. Dark matter can be classified according to its velocity as cold, warm, and hot. Cold dark matter moves slowly compared to the speed of light. It is referred to as cold because of its weak interaction with ordinary matter and electromagnetic radiation. It is hypothesized that ordinary matter, observable cosmological structures, emerge in this way through a gradual accumulation of particles.

In the distant future, Bitcoin will likely accompany humans into space, but it will probably continue to be mined on and near Earth (so long as the Earth remains habitable) due to the minimum time penalty incurred when communicating across space. Bitcoin final settlement can be achieved at great distances, across the universe wherever transmitters, relays, and receivers can communicate signal, and it can be used anywhere the data describing a funded key pair is present. In this universe, Bitcoin will become an economic constant as it is the simplest and soundest explanation for what money is. Bitcoin accounts for the following properties.

1) Bitcoin’s existence posits that humans can own property outside of state control, and that any divisible amount of perfect money is sufficient to support any economy. Bitcoin will scale on second layers to fill the economic void left by a fragile balance of debt and power, with provable ownership and proof of work being the only prerequisites to spending.

2) The accelerating rate of Bitcoin adoption will continue until it becomes the global currency standard, proving that hard money cannot stay niche and many markets today are simply misguided allocations made in attempt to store value over time.

3) Bitcoin’s open source accounting protocol allows anyone to audit not only the monetary supply, (which is impossible to do in fiat) but also the history of on-chain, final settlement transactions.

4) Bitcoin accounts for the most precise form of monetary measurement available to us. Unlike gold or dollars, Bitcoin is unforgeable, and it cannot be debased by the will of governance. Bitcoin is sheer monetary energy. Because it can’t be confiscated or debased, Bitcoin (and Bitcoin alone) allows for the final settlement of digital energy.

Bitcoin will play an ever-increasing role in the day-to-day trades the population makes with its time until the world is running on a Bitcoin standard. This is simply because Bitcoin offers property ownership to the market in a way the world has never had before, and it is unstoppable and ungovernable. The unrealized demand for this scarce product is infinite. The three economic constants of our future will be Bitcoin, material resources, and time.

Read The Center Cannot Hold: 8: “Bitcoin Is The Singularity”

Read The Language of Bitcoin: 5: “Bitcoin Has No Competition”

Read The Language of Bitcoin: 4: “Bitcoin And Existential Risk”

Read The Language of Bitcoin: 3: “Bitcoin: The First and Final Rival Money”

Read The Language of Bitcoin: 1: “BTC Is The Best Explanation For The Way Money Is”