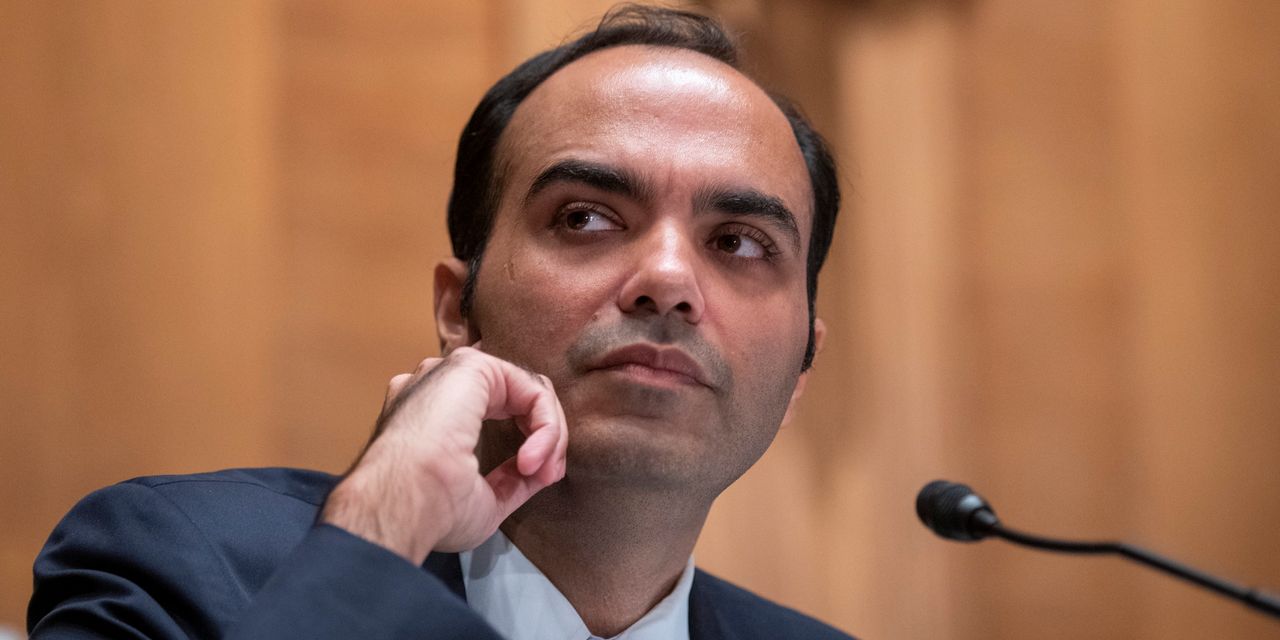 WASHINGTON—Democratic members of the Federal Deposit Insurance Corp. are pushing to review regulations around big-bank mergers, showing the Biden administration’s wider concern with such tie-ups.

Members of the FDIC are meeting Tuesday for the first time since a partisan fight over mergers spilled into public view last week. Three Democratic members, including two appointed by President Biden, sought to launch a regulatory process related to mergers without the support of the chairwoman of the agency, a Trump-era holdover. The FDIC is one of three federal bank regulators with a role in approving bank mergers. The group also includes the Federal Reserve and the Office of the Comptroller of the Currency.

Acting Comptroller of the Currency Michael Hsu and

—voted last week to release a request for information seeking public input on bank mergers, according to CFPB and FDIC officials.

“The question is how do we promote competition amongst large banks while preventing too-big-to-fail firms from forming,” Mr. Hsu said in a Dec. 8 interview, speaking broadly about merger policy.

the FDIC’s Trump-appointed chairwoman, blocked the request from being published by the agency. FDIC staff say that the measure wasn’t drafted through normal, staff-led channels and that only the chairwoman controls the agenda before the board. The agency’s staff generally reports to Ms. McWilliams.

Though the Democrats’ request for information appeared on the CFPB’s website, along with a joint statement from Messrs. Chopra and Gruenberg, the FDIC later said there was no valid vote to approve the release.

Supporters say the request is designed in part to jump-start a policy process that has been delayed for months because the Biden administration hasn’t placed allies in key financial-regulatory posts. Those positions include a vice chairman for bank supervision at the Fed, who would likely lead any push to revamp merger reviews.

At present, the merger-review process includes consideration of factors such as a deal’s effect on financial stability and its impact on the convenience and needs of the communities a firm serves. Democrats want to overhaul the way regulators assess both factors, though they haven’t spelled out how, precisely, they plan to change those considerations. Some Democrat policy makers, including House Financial Services Committee Chairwoman

(D., Calif.), are calling for a temporary moratorium on all mergers above $100 billion while officials conduct their review, which could take a year.

Banking lawyers and analysts say the review might mean that the banking M&A market is likely going to be frozen for the foreseeable future.

“The bottom line is it’s going to be a lot harder to do these deals,” said Dan Stipano, a former deputy chief counsel at the Office of the Comptroller of the Currency. “They’re not going to stop completely, but banks will have to make a lot of commitments.”

At least seven mergers involving banks with at least $100 billion in assets have been announced since October 2020. Most recently,

said it would buy MUFG Union Bank’s core retail-banking operations for $8 billion. Meanwhile, bank deals are on pace for their biggest year since at least 2008, when some large banks were forced to sell at the height of the financial crisis.

Though the industry remains profitable, persistently low interest rates make it difficult for banks to make earnings from their bread-and-butter lending businesses. The issue is acute for regional banks, which rely more on lending than banks with large Wall Street operations. What is more, many community and regional banks have been forced to increase their technology spending significantly to keep up with larger competitors whose big budgets allow for flashier apps and digital platforms.

A moratorium would add to pressure from Washington after a July executive order from Mr. Biden asked regulators and the Justice Department for more robust scrutiny of bank mergers.

Industry officials say any restriction on big-bank mergers would be inconsistent with federal law, which already imposes caps on the size of merged banks, including limiting them to 10% of U.S. deposits. A moratorium would also deny lenders the opportunity to compete with larger rivals such as nonbank financial-technology firms that face less intensive regulation, critics say.

the president and chief executive of the Bank Policy Institute.

Critics said the action by Democrats at the FDIC could further politicize the bank-merger process.

“It seeks to establish serious and perhaps insurmountable obstacles to consolidation in an industry where market forces and good public policy are demanding it,” Mr. Baer said.

Though Messrs. Chopra and Gruenberg released a joint statement saying they believed their vote to issue the report was valid, Mr. Hsu wouldn’t comment and didn’t publish the request on his own agency’s website. “He will continue to work collaboratively with other regulators on this and other issues,” a spokeswoman said.

Democrats could use any review to impose new requirements on banks seeking to merge, for instance giving the CFPB a formal say on whether to approve mergers—a topic raised in their request. At present, the CFPB doesn’t have one. Regulators could also overhaul the way they assess a combined bank’s effects on the convenience and needs of a community, beyond the present requirement that firms have a satisfactory rating on their lending to low-income neighborhoods around their physical bank branches.

Some progressive advocates say regulators are moving too slowly.

“This is an issue now,” said Todd Phillips, director of financial regulation and corporate governance at the Center for American Progress, a center-left think tank. “We’re at a point where banking regulators are behind the ball.”

Write to Andrew Ackerman at andrew.ackerman@wsj.com and Orla McCaffrey at orla.mccaffrey@wsj.com