AUD/USD Looks Higher Ahead of Busy Week as Sentiment Improves

Asia-Pacific markets look set for a higher open to start the week. The S&P 500 closed at a fresh record high on Wall Street Friday as the Omicron variant threat was set aside. Instead, traders are focused on monetary policy and this week’s Federal Reserve policy announcement, due out Wednesday. Traders are betting that the Fed will increase the speed of tapering asset purchases and perhaps even hint at accelerating subsequent rate increases.

This morning, New Zealand reported its performance of services index (PSI). The BusinessNZ PSI gauge ticked up to 46.5 from an upwardly revised 44.9 figure, suggesting the service sector continued to contract, but at a slower pace. Visitor arrivals for October fell -27.3% y/y, marking a bit of moderation after sliding -58.1% in the prior month. NZD/USD broke a multi-week losing streak on Friday, although the pair lagged behind its cross-Tasman Australian Dollar counterpart.

Japan released several data points this morning that were weaker than what analysts expected. November core machine orders and the Tankan fourth-quarter large manufacturing index crossed the wires at 2.9% and 18, respectively. The Japanese Yen remains near the weakest levels versus the US Dollar since early 2017. However, the Yen is deeply undervalued across various valuation metrics compared to most of its peer currencies. India is set to report inflation data this afternoon.

Later this week, Australia’s Westpac will report consumer confidence for December. Aussie Dollar traders are looking for an improved figure from November’s 105.3 print now that the economy is opening up following extended lockdowns through most of the year. Australia’s monthly employment report will follow later this week, with the consensus analysts’ estimate tracking at +200k for November. New Zealand is also set to report third-quarter gross domestic product (GDP) data.

AUD/USD is attempting to break above the September low at 0.7170 after prices made several intraday attempts to breach the level last week. The MACD oscillator is showing healthy improvements, with a recent cross above its signal line. The Relative Strength Index (RSI) is tracking higher as well. A failure to pierce higher may result in prices retreating back to the August low near 0.7106. 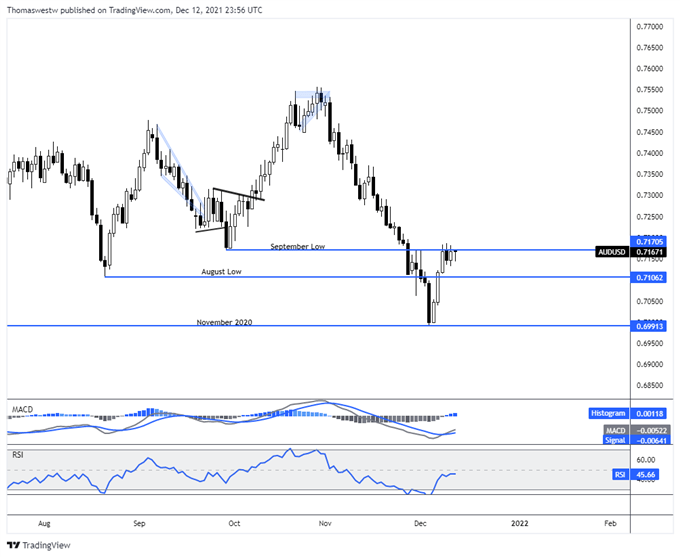